Ryanair changes Brexit tack to ‘get behind’ UK economy

‘We need to end a lot of the gloating’ over UK’s difficulties, senior executive argues 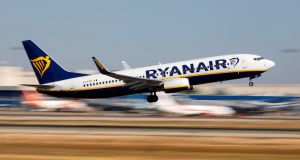 Ryanair is “wrapping its arms” around its UK staff in order not to lose them. Photograph: Paul Hanna/File Photo/Reuters

There was “too much gloating” in Ireland about the UK’s difficulties over Brexit, a senior Ryanair executive has said.

“As an airline we have taken the view not to be bashing the English,” Peter Bellew, Ryanair’s chief operating officer told an economic conference in Co Kerry.

Apparently rowing back from Ryanair’s predictions last autumn, when the airline’s chief executive, Michael O’Leary, warned that UK planes would be grounded for up to three weeks, Mr Bellew said: “I don’t see there being an overnight stoppage of any flights” arising from Brexit. This was because Ryanair, like other large airlines, had taken complicated and costly steps to set up subsidiaries, he told the second annual Killarney Economic Conference on Friday.

The UK exiting the EU would make it more technically complicated and more costly for airlines to operate in the country. However, Ryanair was trying to be “inclusive” of the English and advocate for them at regulatory level in Europe and he said he would urge the Government, the people of Ireland and businesses here to do the same.

“We need to get behind the UK economy a little bit more, and end a lot of the gloating that is going on,” Mr Bellew said.

“We have been obsessed with backstops and the devil knows what. It has all moved on now.”

He noted many UK companies were suffering from “rapid loss of staff”, with personnel from eastern Europe returning home amid fears for the UK economy.

Ryanair was “wrapping its arms” around its UK staff in order not to lose them, Mr Bellew said.

The airline had more than 6,000 people working in the UK.“At a very human level, it has been very distressing for staff over there.”