Chris Johns: For Brexiteers the point is to win. Everyone else can go hang 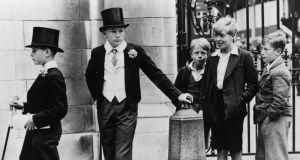 English elite: only two things matter – to win the argument and to promote the interests of my class. Photograph: Jimmy Sime/Getty

The first time I met an old Etonian was back in the early 1980s. I was spending a day a week as an economics tutor in an ancient college of Cambridge University and had been tasked with reading and discussing some of the student’s weekly essays.

Regular readers of this column will no doubt be astonished to learn that this erstwhile tutor was somewhat lefty in those days and made no attempt to hide his views. In a regular clash – always an unfailingly courteous one – with an undergraduate from Eton, I asked him why he always seemed to disagree for the sake of it, rather than changing his mind based on reason and logic.

In a school or university debating room, the point is to win, not to change minds. There is a hope, I guess, that if the facts are revealed to be obvious, opinions will be tweaked. But debating, particularly of the political kind, is too often rooted in the rhetorical tricks learned at places like the Oxbridge Union. The game is to bludgeon the opposition, not convert them.

Brexit reminds me of both my old Etonian friend and school debates. The rhetorical trick most often used is to state something that is obviously true in response to your opponents’ argument and then to stare triumphantly at either the camera or the other side of the debating chamber. That true statement will have little logical connection to what went before: a non sequitur.

So, for instance someone might say, “Brexit, even though it hasn’t started yet, is contributing to a growing shortage of critical medicines” – this is actually happening, with suspicions of stockpiling at several points in the supply chain.

A typical Brexiteer response to these concerns is to say, “but we survived rationing in World War 2”. The word “rationing” conveys a kind of superficial connection with a shortage of important drugs (or, indeed anything else). And the the word “survived” has a warm, slightly fuzzy feel to it: it encourages the feeling that everything will be okay.

The constant references to wartime hardships and ultimate success are, of course, perfectly true. In court, but not in parliament, we demand the whole truth, not just the truth. The suffering that accompanied wartime rationing is, of course, never mentioned, and is part of that bigger truth.

Also unsaid, is the simple fact that most of those arguing for a return to those halcyon days of rationing are most unlikely to be affected by any current or future shortages of food or medicines. Or any of Brexit’s inconveniences. Their wealth and connections will ensure their material comforts are sustained.

The most important development since Theresa May’s deal was rejected has been the emergence from the shadows of the hard Brexiteers. They have been around for a while, but a small but significant minority of MPs are now shouting from the rooftops about the sunny uplands offered by no-deal. There is no feigned reluctance, no equivocation, no attempt to say, “of course, a deal would be preferable”. No deal is now the prize.

The debating trick they use at every opportunity is to insist that any compromise, any suggestion of a deal, betrays democracy, betrays the original referendum: “Anything less than hard Brexit will be divisive and, whatever happens, we will survive no-deal.”

This is all true but irrelevant. My old Etonian student gave me many lessons in politics which I will never forget, ones that often revealed my naivety. He once cheerfully acknowledged that even when I had truth or justice on my side of the argument, he would never concede. He once told me: “Only two things matter, in the following order: to win the argument and to promote the interests of my class.”

The UK has always been divided. Structures to paper over the cracks have been developed over centuries but the fissures have always been there. In similar and different ways, all countries have them.

The only real differences between nations are the methods they use to deal with wealth, income, social and all the other gaps that we pretend are only present in somebody else’s society. Brexit merely exposed the British gaps, it didn’t create any new ones. Neither would a second referendum or any other of the compromises that Theresa May refuses to consider.

The ruling class has an uncomfortably large number of people who represent themselves and see politics, in large part, as a game to be won. On the other hand, there is a majority of MP’s who do not want a hard Brexit. This latter group is disorganised, chaotic and lacks leadership. By contrast, the Brexiteers look like a well-oiled machine

Formal betting odds on a delay to the impending 29th March deadline have shortened considerably. Consistent with that, sterling has stabilised and even moved up a little.

This all looks perfectly sensible in the context of the majority who want a deal: to get that deal now requires a delay to the article 50 process. I’m more interested in the odds of a hard Brexit, the odds that the foreign exchange markets are wrong. Bookies have either a deal or an extension as 1/7 odds on, with no-deal 7/2 against. Tempting, but only in the sense that horrific traffic accidents are interesting.