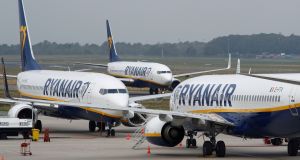 Ryanair said yesterday that full-year profits could be about €100 million lower than expected in its second such warning in four months.

The Dublin-based airline lowered its guidance for the profit it will earn in its current financial year, which ends on March 31st, to €1 billion-€1.1 billion, from a prediction in October of €1.1 billion-€1.2 billion.

Ryanair blamed a 7 per cent fall in winter fares for what was its second profit warning in four months. In early October it told the markets that profits could be up to 12 per cent lower than the €1.25 billion-€1.35 billion it originally expected to earn in this financial year.

However, its shares ultimately shrugged off the news, closing 0.3 per cent up in Dublin at €10.095. They plunged more than 6 per cent in earlier trade, hitting a low of €9.548 before recovering as buyers moved into the market.

Michael O’Leary, the airline’s chief executive, said that while there was disappointment at this “slightly lower full year guidance”, a better-than-expected performance on costs, stronger traffic growth and good ancillary sales were all positive factors for the medium term.

He pointed out that there was overcapacity in European airlines. Mr O’Leary stressed that Ryanair would continue with its strategy of selling seats to fill its aircraft, no matter what the price.

“We believe this lower-fare environment will continue to shake out more loss-making competitors, with Wow, Flybe and reportedly Germania, for example, all currently for sale,” he said.

Additionally, Ryanair flagged that ancillary sales would be stronger “as more customers choose lower cost optional services” and slightly better unit costs in the second half of the year.

All of those factors help to “defray the impact of these lower-than-expected winter fares”, Mr O’Leary said, adding that the fact Ryanair was passing on lower cost benefits to customers is good for growth and market share. He said that was evidenced by the announcement by low-cost carrier Norwegian Air to close a series of bases where they competed with Ryanair.

In a note to clients, Davy stockbrokers said profit was likely to end at the lower end of the range. “The key question for the stock is what happens post winter,” Davy analysts said.

1 Wet pub openings fuelled big rise in Irish Covid infection rates
2 Chris Johns: Economies may enjoy ‘roaring twenties’ if ministers learn lessons
3 Basic income for all: Has the Covid crisis given us a new economic model?
4 Direct sea routes to Europe offer certainty in choppy Brexit waters
5 Only way is up for Stripe as valuation skyrockets
6 How long can Government afford to keep State pension age at 66?
7 Pandemic brings a halt to Zara-owner’s Irish expansion
8 How to gift your child a house deposit . . . tax free
9 ‘I don’t need to do any of this. . .I don’t actually need to work.’
10 Karlin Lillington: How I managed to cut my mobile phone bill by at least half
Real news has value SUBSCRIBE