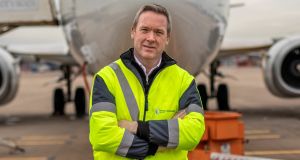 London’s Stansted Airport hopes to lure long-haul services with a radical offer to manage transfers between airlines, removing the burden from the carriers themselves.

The airport, the biggest single base for Irish airline Ryanair, has begun work on the first stages of a £600 million development that will allow it handle up to 43 million passengers a-year and expand into the long-haul market.

Chief executive Ken O’Toole confirms in an interview today that the airport plans to offer to take responsibility for managing passenger and baggage transfers between airlines operating there, a job now done by the carriers themselves in airports that offer the service.

Airlines with interline agreements, which allow people to buy connecting flights from two different carriers, must ensure that any checked-in baggage gets from one aircraft to the other at the airport where customers transfer.

This means passengers can check in bags at their departure airport and collect it on arrival.

The current alternative is “self-transfer” where travellers buy connecting flights but have to collect and re-check in baggage themselves at the airport where they switch from the first to the second leg of their journey.

The Irish airport executive says Stansted hopes to launch its alternative this year. The system is designed to stimulate transfer business between the airport’s existing short-haul carriers and the long-distance operators it plans to attract.

Stansted will provide software that will communicate between two airlines’ booking systems, so it can track where the baggage is supposed to go.

At the physical side, the airport will treat the bags as if the carriers have an interline agreement, moving them from one aircraft to the other, eliminating the need for multiple check-ins.

Mr O’Toole indicates that talks with existing short-haul airlines about the plan have been positive.

“If we can provide them with an opportunity that can create additional demand, that doesn’t see them taking responsibility for missed connections or stuff like that, makes it easy to integrate into their booking flows, why wouldn’t they take that opportunity?” he asks.