Leading British cabinet Brexiteer Liam Fox speaking on the Andrew Marr Show on the BBC has suggested that negotiating with the EU over the Irish backstop could rescue the Brexit withdrawal agreement. Video: BBC/ The Andrew Marr Show 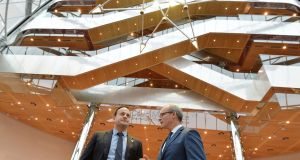 Taoiseach Leo Varadkar and Tánaiste Simon Coveney have both roundly rejected as a “non-starter” British suggestions of a bilateral treaty with Ireland in order to avoid a Border backstop.

The Government said it had received no formal approach to discuss such a proposal. Details of such a bilateral treaty, reported in the Sunday Times this weekend, envisaged both governments bypassing the EU and arriving at a deal that would guarantee an invisible border and common travel.

Mr Varadkar’s spokesperson said the Taoiseach’s consistent view was the backstop was “not negotiable” and was there for a reason – namely to avoid a hard border, to protect the peace process and to guarantee human rights.

“It is not something we would entertain,” said the spokesperson. “It would not work, as so many of the issues pertaining to Ireland are related to EU law, and are negotiated and agreed through the European Union. Ireland is much stronger negotiating through the EU task force.”

The spokesperson said the dissident republican car bomb detonated in Derry on Saturday “should surely serve as a sober reminder of the past to [which] we do not want to return”.

A spokesman for Mr Coveney, the Minister for Foreign Affairs, described the treaty suggestion as a “non-runner”, and referred to its conclusion in Article 50 the Lisbon Treaty formally signed in March 2017. Mr Coveney has argued that the backstop need never be activated if a comprehensive agreement is negotiated governing future relationships and trade.

Mr Coveney is expected to brief the EU’s chief negotiator Michel Barnier on the margins of a meeting of foreign affairs ministers in Brussels on Monday.

“They will discuss the political situation in Westminster and the Tánaiste will also update M. Barnier on the Government’s planning for a ‘no deal’ including the draft omnibus Bill on a ‘no deal’ to be published later this week,” the spokesman said.

Mr Varadkar and Mr Coveney will meet opposition party leaders on Tuesday to update them on Brexit negotiations and brief them on the omnibus Brexit Bill. “We expect a full explanation at last for what the law will do as that was committed to last week,” said a spokesperson for Labour leader Brendan Howlin.

German foreign minister Heiko Maas said on Sunday it was unclear how any talks between Britain and Ireland on resolving the question of the Irish backstop could help the EU’s deal with London on Brexit.

Asked by ZDF television about the reports on a bilateral deal with the Irish government, Mr Maas said it was unclear how it would work.

“We have to negotiate and also agree a withdrawal agreement with Britain. It is a bit of a mystery to me what the British government wants to negotiate with Dublin or what sort of an additional agreement it should be,” he told German television. It won’t have any effect on what was agreed with the (European) Commission.”

Meanwhile, in an interview with Monday’s edition of Die Welt daily, former British prime minister Tony Blair, a pro-European, said it was pointless for the EU to make concessions to Britain.

“Even if the EU moves away from the backstop and gives up the position of the Irish Government, which I don’t think will happen, even that wouldn’t save the deal,” he said, adding he put the risk of a no-deal Brexit at just 10 percent.

The Sunday Times had reported that British prime minister Theresa May plans to seek a bilateral treaty with the Irish Government to remove the contentious backstop arrangement from Britain’s EU divorce deal.

The newspaper said aides to Mrs May thought such a deal would remove opposition to her Brexit plan by the Democratic Unionist Party, which supports Mrs May’s minority government, and by pro-Brexit rebels in her Conservative Party.

The Irish edition of the newspaper quoted a senior Irish Government source as saying the bilateral treaty proposal was “not something we would entertain” and a second senior political source as saying it would not work with the European Commission.

Mrs May suffered a heavy defeat in parliament on Tuesday when Conservative lawmakers and members of other parties rejected her Brexit plan by an overwhelming majority.

That left Britain facing the prospect of no deal to smooth its exit from the EU in little more than two months’ time. The prime minister is due to announce on Monday how she plans to proceed.

Many Conservatives and the DUP oppose the backstop that the European Union insists on as a guarantee to avoid a hard border between the Republic and Northern Ireland.

On Saturday, Mr Coveney said Dublin’s commitment to the Brexit divorce deal struck with the British government was “absolute”, including the backstop arrangement.

The Sunday Times also said a group of politicians in Britain’s parliament would meet on Sunday to consider ways in which they could suspend the Brexit process, wresting control away from Mrs May’s government.

Earlier, leading British cabinet Brexiteer Liam Fox hit out at moves by MPs to rewrite the Commons rule book in an attempt to “hijack” Britain’s withdrawal from the EU.

The international trade secretary angrily accused backbenchers of trying to “steal” Brexit from the British people who voted to leave the EU in the 2016 referendum.

At least two cross-party groups of MPs are planning to table amendments to enable backbenchers to take control of the business of the House to delay or frustrate Mrs May’s Brexit plans.

One group led by Tory former minister Nick Boles and the senior Labour MP Yvette Cooper is attempting to block a no-deal Brexit – something Mrs May strongly opposes.

A second, led by the former attorney general Dominic Grieve, is said to want to go further and suspend the Article 50 withdrawal process.

Dr Fox warned that the political consequences if Parliament was to go back on the referendum result would be “astronomical”.

“You’ve got a Leave population and a Remain Parliament,” he told BBC1’s The Andrew Marr Show.

“Parliament has not got the right to hijack the Brexit process because Parliament said to the people of this country ‘We make a contract with you, you will make the decision and we will honour it’.

“What we are now getting is some of those who always absolutely opposed the result of the referendum trying to hijack Brexit and in fact steal the result from the people.” – Additional reporting: Reuters/PA

1 Mandatory quarantine and flight cancellations unlikely despite rise in cases
2 Two in custody after Ryanair flight to Dublin forced to divert
3 California shuts down again as US coronavirus cases surge
4 US passengers fly into Dublin: ‘I’m here for six days. I guess I’ll have to stay inside’
5 Cowen under pressure to answer further questions on gardaí encounter
Real news has value SUBSCRIBE