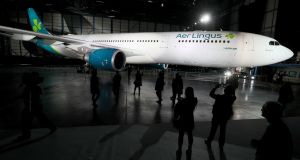 The UK looks increasingly likely to crash out of the EU without an agreement on March 29th, prompting fears that flights between the jurisdiction and the EU could halt temporarily.

However, Mr Doyle said that there was no risk of this. “We will continue flying as we have done on 30th March as will do on the 28th,” he said.

Mr Doyle was speaking as Aer Lingus revealed a new brand that will see its aircraft convert to a mainly white livery. This marks a shift from the mostly green colours that it has used in recent decades.

The new colour scheme still includes green, which will be visible on the tail fin and other areas, while Aer Lingus is keeping the shamrock that its craft have carried since the mid 1960s.

Mr Doyle acknowledged that modern air travellers focused more on getting the cheapest and most reliable flights than on branding.

Nevertheless, he noted that the Aer Lingus brand still had a strong emotional resonance for Irish people.

He argued that the airline is continuing to build a business as the value carrier on the north Atlantic.

Aer Lingus has not said how much it is spending on the rebrand, but the figure is thought to be less than €2 million.

The Airbus A321 long-range craft that Aer Lingus has ordered will be painted in the new livery when they begin arriving later this year.

The airline repaints existing craft as a matter of course, something that is required by regulations, but intends to speed up its schedule for doing this. It has already re-branded its website and smart phone app.

The Aer Lingus boss said that regional airline Stobart’s joint bid for Flybe is unlikely to hit its relationship with Aer Lingus.

Stobart, which operates the Aer Lingus Regional service, is joining forces with Virgin Atlantic and US investor Cyprus to take over Flybe and plough around €110 million in the ailing airline.

He said that the partnerships with both regional airlines were complementary and served different purposes in terms of feeding passengers into Aer Lingus’s hub at Dublin Airport.

1 Admission of mistake in Oxford vaccine dose raises doubts over reliability
2 Move to EU or face disruption, City of London is warned
3 Cliff Taylor: Deal or no deal we are now heading for a hard Brexit
4 Fiona Reddan: Who’s afraid of Revolut? Not AIB and BOI it seems
5 Last orders for Rí-Rá and Globe as Central Hotel gets green light to expand
6 Karlin Lillington: How I managed to cut my mobile phone bill by at least half
7 Greystar in €180m bid for Griffith Avenue apartment portfolio
8 Irish Life fund pays €49m for 94 Dalkey apartments
9 Lahinch Golf Club runs out of its own cash after €3m Covid-19 hit
10 Son putting elderly dad under pressure to sign over land
Real news has value SUBSCRIBE