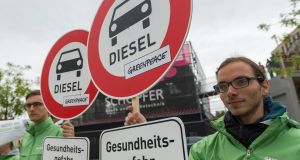 Greenpeace members protest against diesel emissions. According to T&E, if one takes a measurement of a car’s whole-life carbon dioxide emissions, as opposed to merely localised exhaust pipe emissions, diesel cars actually cause the emission of more CO2 than an equivalent petrol car.

Much of the talk at last week’s Frankfurt motor show was about diesel, and how it’s still a critical fuel source for the future of motoring. In spite of the show marking the second anniversary of the breaking of the VW Group’s so-called “dieselgate” scandal, many car makers were keen to make the point that, while there is much controversy over diesel’s effect on air quality, diesel engines are still enormously important when it comes to meeting climate-change-related CO2 emissions legislation.

New research, from lobbying group Transport & Environment (T&E), could just have blown that out of the water. According to T&E, if one takes a measurement of a car’s whole-life CO2 emissions, as opposed to merely localised exhaust pipe emissions, diesel cars actually cause the emission of more CO2 than an equivalent petrol car.

In fact, according to T&E, an average diesel-engined car will cause the emissions of 3.65-tonnes more CO2 than a petrol car. Diesel’s higher climate impact, claims T&E, is due to a more energy-intensive refining of the diesel fuel; more materials required in the production of heavier and more complex engines; higher emissions from the biodiesel blended in the diesel fuel; and drivers racking up longer mileages because fuel is cheaper.

Julia Poliscanova, clean vehicles manager, told The Irish Times that “Dieselgate already exposed diesel cars to be the dominant cause of toxic nitrogen dioxide across European cities that is killing 68,000 Europeans annually. Contrary to industry claims, we have learned diesel cars are also worse for the climate than petrol versions and are not needed to meet car carbon dioxide targets, Europe must now look forward and accelerate the transition to clean, electrified vehicles and consign dirty diesels to museums.

“The legacy of Dieselgate are the 37 million grossly polluting diesel cars still on Europe’s roads. While some of them will be taken off German roads, these dirty cars will soon end up in Central and Eastern Europe choking citizens there. We need concerted and coordinated action EU-wide to ensure these cars stop belching toxic fumes for another 10-15 years. It is time for the carmakers to take responsibility for their clean up and cash out for the local measures to tackle the urban air pollution crisis they have largely caused. National vehicle regulators must ensure this happens or the European Commission step in and sort out the mess.”

T&E further claims that the European obsession with diesel (we apparently buy seven out of every ten diesel cars manufactured worldwide) is costing us, both in life and hard cash. An estimate 68,000 premature deaths are caused each year in Europe from air-pollution-related diseases, and T&E estimates that, in 2016 alone, lower taxes on diesel fuel and cars, compared to petrol, cost European governments a combined €32-billion.

While T&E continues to push for more incentives for electric car use and ownership, many have criticised electric cars for being no greener than a conventional internal combustion engined car, once the same well-to-wheel criteria are accounted for. Batteries require intensive construction, for instance, and heavy mining to extract metals such as lithium, vital to battery production.

However, it seems that even with these concerns accounted for, electric vehicles are still much ‘cleaner’ in carbon dioxide terms. David Abraham, author of the book The Elements of Power, told Wired magazine that “We’re shifting pollution, and in the process we’re hoping that it doesn’t have the environmental impact. The greenhouse-gas-emissions footprint of electric vehicles can be pretty high on the front end, as they’re being built, and so you need to get a lot of benefits on the other side, when you use it.”

According to the Union of Concerned Scientists, on average, an American-market petrol-engined car will emit 381-grammes per mile of CO2 over its entire life, as compared to 144-grammes per mile for a battery electric car. It’s possible that the gap will grow in the future, as more battery components are recycled from older electric cars, reducing the reliance on fresh mining.