Ten things we learned from the Frankfurt motor show

It’s the biggest car show in Europe but what did we actually glean from all the glamour? 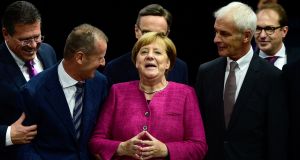 Frankfurt has come and Frankfurt has gone. The biggest car show in Europe, which runs only every two years, has finished with its media and press preview days and is now open for Johann Q Public to go and explore its vastness. The media days are the crucial ones though, the hours in which the car makers get the chance to try and convince the world that their way is the right way. So what did we actually learn from this year’s event?

1. Electric cars are still in ‘look but don’t touch’ mode.

There’s no question that the future of motoring is electric, and that one day a majority of us will be whizzing around in silent, guilt-free electro-boxes. Everywhere you looked in the Frankfurt show halls, there was another battery-powered car just waiting to be plugged in. VW’s Crozz SUV and Skoda’s Vision-E, Jaguar’s I-Pace race car, BMW’s i Vision Dynamics, Mercedes’ EQA, and Honda’s oh-so-cute Urban EV Concept. These are the cars we will drive in the future. Today? Not so much. No-one was showing an electric car that we could actually buy tomorrow, or even before the end of this year. All of the above are at least three years away from actually going on sale (with the exception of the Jag which is due to be on sale in late 2018). The electric revolution is coming, but it’s taking its sweet time getting here.

For all the electric hype, there were a lot of deeply impressive-looking ‘ordinary’ cars on show in Frankfurt. Take the new Dacia Duster. Actually, it’s not new at all, it’s the old one with a new body and an upgraded interior, but it looks much sharper now, to the point where you might buy one for more than just because it’s alluringly cheap. For all of BMW’s electric car hoopla, its new X3 SUV, making a public debut at the show, looks effortlessly desirable and, thanks to being lighter than the old one, should be impressively frugal. Seat, Hyundai, and Kia all showed off compact SUVs (the Arona, the Kona, and the Stonic - sounds like Tolkien characters when you say them together) which could, at long last, prove that compact crossovers can be genuinely good cars, rather than merely fashionable ones. Toyota’s Auris Freestyle, a hybrid rival to the likes of a Skoda Octavia Scout, also looked neat.

In fact, not only have hot hatches not gone away, they’re so popular right now that Seat is going to spin off its Cupra badge into a dedicated sub-brand, kind of like an affordable Spanish version of AMG. The 300hp Seat Cupra R on show in Frankfurt was one of those cars you just wanted to drive right off the stand and take home. Ditto the Suzuki Swift Sport pocket rocket, and the Renault Megane RS with its 280hp turbo engine donated from the Alpine sports car. While the emphasis may have been on electric power, turbo power was still very much in evidence. Best of all? Mini's John Cooper Works GP concept, which should hit the road in 2018 as an ultimate Mini hot hatch. More fun than the Electric Mini concept? Probably.

4. You can make it fast but you might not be able to make it look good…

That the Mercedes-AMG Project One was the star of the Frankfurt show would be hard to deny. It has a Formula One engine, and Formula One-derived aerodynamics and chassis. It has 1,000hp. It will get to 200kmh in the time most really quick cars get to 100kmh. It was driven onto stage by Lewis Hamilton. But it’s ugly as heck. Take a look at a photo of the Project One. Then take a look at a photo of the early 2000s Saleen S7. See any resemblance? And the Project One wasn’t the only high-performance car guilty of aesthetic crimes. Bugatti used the new Chiron to set a world record by accelerating from 0kmh to 400kmh and back to 0kmh in just 42secs, but the Chiron itself is truly fugly. And the newly updated, 600hp Ferrari Protofino isn’t much prettier. Lamborghini created the supercar in the sixties with the original Miura. Arguably Mercedes got there first in the fifties with the original 300SL Gullwing. In style terms, it has been downhill ever since. Humble Kia outdid all of the supercar makers with the simple beauty of its Proceed estate concept.

Ever since the Dieselgate scandal broke during the 2015 Frankfurt motor show, DERV has been the fuel that must not be named. Cities are banning it. Politicians are trying to tax it out of existence.

Buyers are starting to shun it. The problem is, car makers have invested billions in diesel development, and if diesels can’t be sold, then there are going to be some pretty major holes in balance sheets. Worse still, with electric cars predicted to only have half the profit margin of an internal combustion car in the early years of development, car companies really, really need to sell lots of existing petrol and diesel cars to pay for electric R&D. It’s a circle which, really, only Lexus and Tesla have yet broken free from.

Audi spent much of the show displaying its Aicon fully-autonomous concept car, and its idea is that in the future, a premium car will be premium because it will offer a more relaxing, more comfortable interior environment. Dr Ralf Speth, head of Jaguar Land Rover, spent much of his presentation talking about how people will still want to drive and be connected with their cars. But with much of the future seemingly predicated on pods that drive themselves, who but a few enthusiasts will much care about cars?

Brexit has really thrown a major spanner in the car making world’s workings, even if few manufacturers care to admit it. The UK market is a big one, especially for higher-end cars, and while the laser lights and fake smoke were swirling in Frankfurt, in London MPs were rancorously debating The Great Repeal Bill which is the first legislative step on the road to Brexit. But a hard Brexit or soft Brexit will mean very different things to the car world, an still the future is too opaque. Carlos Tavares, the head of Groupe PSA which has just bought Opel and Vauxhall from General Motors, said at the show that he couldn’t guarantee that the Vauxhall factories which make the Astra and Vivaro in the UK would stay open in the event of a hard Brexit. Others are worried too. Toyota, which has a huge factory in Derbyshire, said that if hard Brexit comes, it might have to pull major operations from the UK. “We will not postpone a new product for three more years just because the negotiation is going to take three more years,” Toyota’s European executive vice president Didier Leroy told Reuters in Frankfurt on Tuesday. “It’s clear that if we have to wait two to three more years to have clarity on this topic, we will have a big question-mark about our future investment in the country.”

While there are many who predict a dim future for motor sport, some manufacturers are still hugely keen on the idea.

BMW decided that the first time we should see the new 8 Series Coupe should be in racing trim; decked out in BMW Motorsport colours, with a huge rear wing and diffuser, ready to take on the Ferrari 488 and Ford GT in the World Endurance Championship and at Le Mans next year. Jaguar showed off a racing version of the I-Pace electric SUV, specifically designed to go racing to drum up excitement in electric cars. This battery-fuelled one-make series will be on the support programme for Formula E next year. And as press day closed, Formula One news started to drift in. McLaren ditching Honda for Renault as its engine supplier. Honda moving to Toro Rosso. And Porsche to buy out Red Bull? All is possible, and all still get people pretty excited.

9. There’s still a lot of vapourware at motor shows.

We’ve become used to promises unfulfilled at motor shows. Concept cars never seriously considered for production. Sports cars whose business case falls apart. Cars meant only for the show stand, never for our driveways. We understand that. It’s the way of things.

The Wey of things though? Chinese car maker Wey brought along what looks like a ripoff of VW”s ID Crozz concept, only it had apparently been assembled from discarded Airfix kits. Taiwanese company Thunder Power proved that you can have an awesome name without an awesome product. It’s 580hp electric saloon is supposed to be a Tesla Model S rival but looks like a sea monster attacked a Nissan Maxima. Only China’s Chery, with its smart-looking Exeed TX hybrid, looks like a serious new competitor to the European grandees.

Thought that the Project One was the craziest Mercedes at the show? Forget it, look instead at the Brabus stand. The quasi-official Mercedes tuner brought along its new One Of Ten. Based on that mobile garden shed, the Mercedes G-Wagen SUV, the One Of Ten takes an AMG twin-turbo V12 engine, bores it out to 6.5-litres, changes the turbos, and makes it produce 900hp and 1,500Nm of torque. In the massive G-Wagen, that’s still good enough for a Porsche Cayenne Turbo-matching 3.9sec 0-100kmh run. Insane, but impressive. And you can actually buy it.