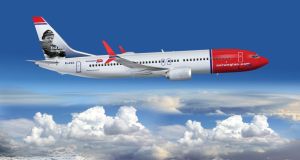 Newest aircraft in Europe begins from Cork The newest aircraft in Europe, the Boeing 737 Max 8, landed in Cork on Tuesday, coming into service on Norwegian Air’s route to Boston Providence. The image on the aircraft’s tailfin is, appropriately, of Irishman Jonathan Swift. The Max 8, which has 189 seats, boasts lowered emissions and, because of its noise-suppression technology, a smaller noise footprint. The 189-seat aircraft feature noise suppression technology. Cork Airport passengers can still avail of a transatlantic seat sale with Norwegian, with fares starting from €99 one way on flights to Boston Providence between October 16th and March 16th next year. The sale ends at midnight on September 18th.

So far this year Convention Centre Dublin has won more than €46 million of new business. The revenue boost was a result of winning 100 new conferences for the city and county over the last number of months. International delegates will top 30,000 visitors to Dublin over the period 2017-2020. Some of the conventions confirmed include World Con, a science-fiction convention for 5,000 people in 2019. There will be an international convention on obesity with 2,300 delegates, as well as and the European Federation of Periodontology Master Clinic with 800 delegates.

An in-depth blog about security, Krebs on Security, is reminding people about the potential dangers of carelessly discarding boarding cards. They also caution about posting pictures of your boarding card on social media. A boarding card contains far more information than you would believe and can help criminals break into your airline bookings or loyalty club and steal identification information. The barcode and QR codes can have all your details and can be read by using scanning apps. The data can include future travel plans, passport details, loyalty club membership and allow thieves to change all of this. Be careful where you dump your boarding card or use smartphone apps, where possible. Concert tickets can also be hacked to provide personal information.

1 Oxford Covid vaccine trials offer hope for elderly
2 Hurrah for the companies giving staff more time off
3 Ulster Bank to introduce new card payment controls on app
4 How much state pension will I get next year?
5 Sustainable investment: How your pension can help tackle climate change
6 RTÉ to seek 70 voluntary redundancies as ‘large costs’ beckon in 2021
7 Some Irish money market funds came close to danger in March
8 Apple planning updates to its AirPods earbuds next year
9 How long can Government afford to keep State pension age at 66?
10 Aryzta to pursue asset sales as takeover talks fail
Real news has value SUBSCRIBE