Frankfurt motor show: Harald Kruger says ‘no cheating at BMW’ as he commits to 25 new electric models by 2025 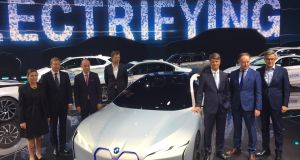 Dr Harald Krüger, chariman of BMW Group (third from right) joins the firm’s executives as he introduces the BMW i Vision Dynamic

“We have never manipulated our cars, our cars are clean. There is no cheating in the BMW Group.” That was the opening message from BMW chairman Harald Kruger at the Frankfurt auto show, addressing the recent scandals that have engulfed the German car industry.

Instead of the usual stilted presentation the BMW boss chose to do a sit-down interview with German current affairs journalist Dr Hajo Schumacher. With a promise of no pre-agreed questions, the discussion moved from the recent diesel cheating scandal to the allegations of cartel activity between the German car firms.

“Are you part of a cartel?” asked Schumacher. According to Kruger “there is nothing official (in terms of charges) as far as we know, but we are taking this serious. We are analysing this internally, most of it goes back to the 1990s.”

However he did defend in principle discussions between car firms. “Talks between manufacturers are nothing new. Think of the plug for electric cars; if there is no cooperation on standardisation this would not be in the interest of customers.” Overall the format worked well, presenting the human, personable side of Kruger, an uncommon characteristic amongst top-level car executives.

The main message from BMW, however, was that it was well-advanced in becoming an electric car firm. With a fleet of full electric and hybrids already on the market it has committed to a rapid expansion of this offering. “We at BMW made the switch to electric early and we are now committed to have 25 electric models on the market by 2025, 12 fully electric (the others hybrid variants).”

As part of this the firm unveiled its BMW i vision dynamics concept, capable of 0-100km/h in 4 seconds, and promising a range of 600km. The car is a concept of a car that will enter production as the i5, the third model of its i range, following the i3 supermini and i8 supercar.

There was other new metal on display as well, including the odd-looking X7. A seven-seat hybrid SUV concept, it bears remarkably similar styling to the successful Volvo XC90, albeit with a brash BMW grille on the front. This is actually a thinly-disguised version of a model that is going into production very soon. It has the makings of a love-it-or-loathe it SUV and if you don’t like SUVs and all they stand for, then this is likely to be your latest nemisis.

Behind the main stage crammed with electric promise, however, was the tempting reality of the brand: it’s high-performance M Division with the latest M5 on display. This is the model set to lure the loyal followers to the BMW stand when the public starts to visit later this week. And it is BMW’s ability to retain the level of passion car fans have for its M Division models, while moving to electric power, that will define the brand’s success and failure in the future. For now the questions will keep coming, and not just about ongoing scandals over emissions and alleged cartel activity.