Mercedes’s Project One hybrid supercar steals the show as VW, BMW and Honda among those to unveil upcoming EVs 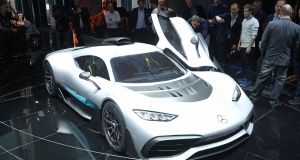 Mercedes’ Project One supercar can hit 200km/h in six seconds with a top speed in excess of 350km/h. Photograph: Getty Images

How the world has changed in two years. In 2015 when the world’s auto giants gathered in Frankfurt for the biennial motoring bunfest, diesel was the clean green low CO2 option. Electric cars were for the future and the car giants with their massive investments in combustion engines and competitive advantages in engineering such cars were in no rush to make the change.

Now in 2017 it’s basically an electric car show. Murmurs about diesel and petrol engines are for the one-to-one interviews, reminding journalists that “we still make regular cars”. But every presentation promised a surge of electric models in the next five years.

Even the hypercars, heroes of any car show, come with batteries. Mercedes stole the show with its Project One supercar, a 1,000bhp F1-derived collectors item with an eyewatering multimillion euro price tag. It’s reported that 50 have been pencilled in for the US market and all have sold already. And powering this racer is a 1.6-litre hybrid engine. Erase all your perceptions about electric and hybrid to date: this car can hit 200km/h in six seconds with a top speed in excess of 350km/h.

As a sign of the message the motor industry wants to send out, the Mercedes stand says it all. Or rather the Mercedes Hall, for it takes over an entire building for itself, covering three floors each the size of a football pitch. The first two floors are entirely given over to future concepts and autonomous features. There’s even an electric helicopter, the Volocopter, in which Daimler has invested. It’s being billed as a future flying taxi. For cars you might actually get to buy, like the new S-Class or E-Class convertible, they are stashed away on the top floor.

Even VW Group is eager to set itself in a new light. All-electric crossover concepts from VW, Skoda, and Audi are on display and all of them due to be on sale within 36 months.

BMW too showed a futuristic electric car concept, its dramatically-styled i5 preview showing us what the third string to the all-electric i-range will look like when it goes on sale in 2021, while Honda showed us the cute-as-a-button Urban EV concept that you’d just love to snuggle in your arms and bring home with you. Renault went so far as to create an entire house, brought to the motor show stage, to show how its Symbioz electric concept car can be charged from, or provide charge to, and be fully integrated into your living space.

The electric car future is, of course, being driven by legislation. The UK and France have already announced that all vehicles sold by 2040 must have some electric drive component, while Scotland has gone its own way and announced similar legislation for 2030. China is known to be mulling over something similar, and if that goes ahead then all internal combustion bets are off.

China remains something of an elephant in the Frankfurt room, not just in legislative or purchasing power terms, but in its indigenous vehicle makers. One of those, Chery Automotive, came to Frankfurt with a very smart-looking SUV, engineered in part by European giants Bosch and Continental, which looks as if it could easily rival an Audi Q5 or BMW X3.

Of the more realistic options so far, Seat’s new Arona small crossover looks smart, as does Hyundai’s surprisingly handsome fastback i30 not-quite-coupe. The Kia Stonic crossover also looks neat, although the slinky Proceed concept sports estate was rather more eye-grabbing. The good news is that this car could well make it into production with only the slightest amendments.

Kia is rapidly becoming one of the most stylish brands on the market, with the Sportage and Optima already turning European heads. Now it’s bringing forth more potency with its Stinger four-door coupe and all signs are that the next-generation Ceed (dropping that silly apostrophe in the process) will be a real stunner. While the Mercedes Project One clearly steals all the headlines, the Proceed concept is probably the best-looking car at the show that’s close to the bank balances of most car buyers.

Less stunning but more price sensitive, the Dacia Duster is heavily updated rather than all-new, but looks sufficiently smart now as to be desirable for more than merely a low price tag.

Opel has launched both its Grandland X rival to the all-conquering Nissan Qashqai, and its first plug-in hybrid model in Frankfurt. Frankfurt is Opel’s home-town show, and the brand is obviously keen to put on a strong performance as it’s now under the management of Groupe PSA, which also owns Peugeot and Citroen.

New chief executive Michael Lohscheller launched the new Grandland X, and showed off the plug-in hybrid model of the same car, saying “our new Grandland X as plug-in hybrid is the next big example of the opportunities that await us as a member of the PSA group. We will follow this path closely”. The Grandland X uses the same platform and engines as the Peugeot 3008 and the forthcoming Citroen C5 Aircross.

For all the electric focus, it’s worth noting, however, that there remains a rump of combustion engine rebels out there, prepared to defend the diesel engine.

BMW spent much time pointing out that diesel still has a future, no matter what people may think. It’s head of diesel development, Fritz Steinparzer, told The Irish Times that he still foresees diesel sales being relevant to a certain cohort of big mileage customers in the next 10 to 20 years. He also hinted at the future return of diesel plug-in hybrid models for larger vehicles in the premium market.

Meanwhile VW’s chairman, Matthias Müller said that a great many more petrol and diesel cars will have to be sold in order to pay for the future of electric motoring. Mercedes also pointed out that, initially at least, electric cars will have much narrower profit margins, so car makers will have to start making cutbacks as we enter the 2020s in order to account for this.

The public mood is fickle as politicians well know, and right now diesel is dirty. That’s why every car firm is hitching a ride on the electric bandwagon. Yet we will still have to wait and see if all these great promises are delivered to showrooms, while in the wider arena, officials at the Department of Finance and Paschal Donohoe, must start to work out what it might all mean for the national tax take from the motor industry at present, worth an estimated 7 per cent of GDP.

A sudden surge in electric cars will mean a significant drop in tax from fuel and car sales, ultimately leading to a sizeable hole in the public coffers. But such practical problems aren’t going to trouble the car executives at Frankfurt this week. Their focus is on an electric future.