In defence of diesel: BMW’s head of diesel says the engines still have a future 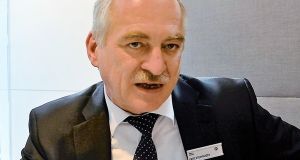 Fritz Steinparzer: “I’m disappointed that some manufacturers, like a French one, is offering cars under Euro 6 EU emissions standards that actually has the same emissions levels as a Euro 5 standards when it comes to the street level.”

All the talk is electric but diesel still has a vibrant future, certainly for the next 20 years. That’s the admittedly understandable message from the head of development for diesel engines at BMW.

At the entrance to the hall Greenpeace stage are staging a protest, with a car seemingly crashed nose first into the street, spewing out dark fumes from its tailpipe. Arguing the case for diesel in the current climate is a challenge to say the least.

Amid the current public outcry over diesel emissions, it would seem the very future of diesel engines is in doubt. Fritz Steinparzer, smiles stoically at the suggestion that his is a thankless task.

Asked if he felt disillusioned that all every car executive talks about these days is electric, he says: “For the diesel today we are struggling a little because of issues we had, but compared to the big issues at one of our competitors, in reality we have not lost so many diesel sales. That says to me there are many customers who really like diesels and this big impact hasn’t led to people no longer buying diesels. And the new diesels, with Euro 6 standards in technology are really very clean. With this position we have on the market, there is no critical discussion regarding emissions. They are on a level to compare with the petrol engines.

Much of the debate around diesel emissions is ill-informed according to motor industry executives, who call for more rational study of all the contributors to air pollution. But the root of the current backlash against diesel stems from VW Group’s admission that it fited cheat devices to its diesel engines in order to claim remarkably low nitrogen oxide (NOx) figures during official US tests.

“When VW Group launched those diesels we also sought to lower the diesel emissions for the US market but we told our board it’s not possible. It’s bad for the diesel what they did, but the current backlash against diesel that we have in Europe, we don’t have in the US. In the US market it is a VW case and not a diesel case but it’s never a discussion that diesel in general is bad. We found the EPA and the legislators are open and well-minded to diesel and if you meet the standards it is fine. It’s actually an easier in the US. Here in Europe the media are focussing on all the manufacturers and that’s wrong, really wrong.”

I think electric is one very important way for the future and maybe at the end of the day all vehicles will be electrified. But in the meantime in BMW we think conventional engines play a very important role for the next 10 to 20 years. There will also be different situations and solutions over the world. Nobody knows today exactly how the mix of drivetrains will be in five years or so, but we are prepared to deliver all of the powertrains that are needed.

“I think at BMW we are still fighting for diesel. The public want us we do electrification, so we do. At the end of the day the customer has to decide what they want.”

One solution for diesel’s revival in the public’s perception may be the return of diesel-electric hybrids. Brought to market several years ago by a couple of manufacturers the format was ruled too costly compared to the combination of petrol engines with electric motors.

Steinparzer hints at the potential return of this format, however. “If a plug-in hybrid is popular in Europe, I’m sure we will have a discussion about diesel hybrid plug-in cars. Particularly with heavier premium cars, the combination of electric driving in the city along with very high mileage and low fuel consumption on longer trips is very interesting.”

The biggest hurdle against diesel hybrids was not technical but rather economic: they couldn’t compete on price against petrol-electric rivals. However, Steinparzer believes a business case could still be made for them. “Let me say in the X5 SUV segment, if one of the big players offered a plug-in diesel then the others will join the race. It’s a competition issue. The question is, does someone start and I’m sure someone will.”

The strategy is the right strategy to start with plug-ins for petrol as this strategy you can offer worldwide, while diesel plug-ins really will only be for Europe, where diesel is a mainstream choice.”

He believes it is possible to revive diesel’s reputation with the latest engines. “We need perhaps another one or two years. It’s very hard to make the argument, however. I think the politicians and other organisations know that it is not possible to fulfil the EU targets overnight.”

Steinparzer highlights a problem with the EU regulations: measurements and standards for what’s emitted from the tailpipe compared to what is actually coming out on the street. He says BMW has always worked to try and deal with the real-life emissions, however competitors work to meet the test conditions.

“I’m disappointed that some manufacturers, like a French one, is offering cars under Euro 6 EU emissions standards that actually has the same emissions levels as a Euro 5 standards when it comes to the street level. It’s this sort of situation that allows other parties involved in the air quality issue to blame all the car manufacturers,” he says.

As to proposed city bans, he says: “In most of the countries there are not bans in place now. It could come but only for older cars, and we hope they will not do it. The fact of a diesel ban is that they will still not mean that cities will achieve their EU air quality targets. We think to agree a package of measures is the best solution. We will not achieve the EU targets in a single year; there is no one measure that will achieve this.”

Has the backlash been too extreme against diesel? Can the public be won back? “Electrification makes sense, particularly as a second car and if you can charge at home. But if you have to go everyday for 200km or more then electric cars don’t suit your needs.”