BMW’s new i5 saloon leaks ahead of Frankfurt show 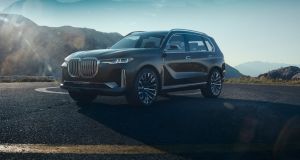 BMW will also bring to Frankfurt the Concept X7 iPerformance, a plugin hybrid concept car that’s a pretty thinly disguised version of its upcoming seven-seat rival to the likes of the Volvo XC90 and Range Rover, the X7

BMW has accidentally (possibly accidentally-on-purpose) leaked an image of its new i5 concept saloon, which will be shown off at the Frankfurt motor show next week.

It comes as the firm revealed its new X7 plug-in hybrid SUV concept, a seven-seater that bears remarkably similar styling to the successful Volvo XC90, albeit with a bold BMW grille on the front. This is actually a thinly-disguised version of a model that is going into production very soon.

The i5 concept picture, which appeared as a screenshot in a promotional video, shows that the concept follows almost exactly the styling of patent office images which leaked out late last year. The i5 (which hasn’t yet been officially named) is reputed to have a one-charge range of more than 650km, and uses much of the lightweight carbon-fibre expertise BMW has gleaned from making the i3 electric hatchback and the i8 hybrid supercar.

BMW’s chairman of the board, Harald Kruger, did say ahead of the Frankfurt motor show that “this year, we will deliver 100,000 electrified vehicles to customers. By the end of 2017, there will be a total of more than 200,000 BMW Group electrified vehicles on the road. We will be increasing the share of electrified models across all brands and model series. And, yes, that also includes the Rolls-Royce brand and BMW M vehicles. Furthermore, we are currently gearing all BMW Group plants towards e-mobility. In the future, we will be able to equip all our models with every drive train. Two flexible vehicle architectures and a flexible production network will allow us to respond quickly and efficiently.”

Speaking about the i5 itself, Mr Kruge said that “we will unveil another significant milestone in our roadmap for e-mobility. It is a vision of how we imagine a four-door, fully-electric vehicle between the i3 and i8. It is a vision we want to realise in the foreseeable future. And a further step in our commitment to sustainable mobility.”

It’s likely that the i5 will reach dealerships in production form by 2021.

BMW will also bring to Frankfurt the Concept X7 iPerformance, a plugin hybrid concept car that’s a pretty thinly disguised version of its upcoming seven-seat rival to the likes of the Volvo XC90 and Range Rover, the X7. Already gathering some controversy thanks to its huge radiator grilles and blunt nose styling, the X7 also previews a new split in the BMW range, where bread-and-butter models are separated out from the likes of the X7, the i8, the 7 Series, and next year’s new 8 Series Coupe. These more luxurious models will actually get a new badge, a black-and-white version of the classic BMW blue-and-white propellor, with the name “Bayerische Motoren Werke” spelled out in full.