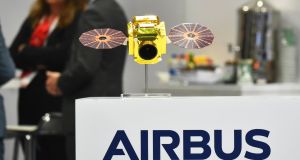 Airbus has struggled to keep up with demand for the so-called cabin flex version of the narrow-body’s A321 variant. Photograph: Mandel Ngan/AFP via Getty Images

Airbus cut its full-year delivery target and said cash flow will be lower than expected as it struggles to capitalise on the grounding of Boeing’s 737 Max.

The European manufacturer now expects to hand over about 860 aircraft this year, down from a previous range of 880 to 890 aircraft, as production challenges slow output of A320neo-series models. Free cash flow is likely to be about €3 billion, rather than €4 billion, it said in a statement on Wednesday.

Airbus has struggled to keep up with demand for the so-called cabin flex version of the narrow-body’s A321 variant. The configuration allows for more seats or longer range, by adding a new rear section and changing the door layout.

The hold-ups come at a time when demand for the model is surging, frustrating Airbus’s attempts to exploit the grounding of the rival Boeing Max.

Adjusted profit before interest and tax rose 2 per cent to €1.6 billion, though that was before one-time costs from the A380 superjumbo programme, which is being wound down, and Germany’s suspension of defence exports to Saudi Arabia.

Airbus won orders for 303 commercial jets through September, excluding cancellations, versus 170 at Boeing. Airbus shares have surged 50 per cent this year, giving the Toulouse, France-based planemaker a market value of €98 billion as of Tuesday’s closed. Boeing has gained 8.2 per cent.

1 Coronavirus: Notion of a rapid economic recovery is at best wishful thinking
2 Coronavirus: Journal Media to cut pay by up to 20 per cent
3 Nice to see you: Which is the best video calling option around?
4 Frontline bank workers to get pay top-ups during Covid-19 crisis
5 Will the coronavirus crisis rehabilitate the world’s banks?
6 NTMA to raise billions of euro for State in bond sale amid Covid-19
7 Mother of invention: the new gadgets dreamt up to fight coronavirus
8 Mater hospital turns to robots to help in battle against Covid-19
9 Fierce backlash to Dutch hard line on eurobonds
10 Irish and European shares slide on Trump comments and dividend suspensions
Real news has value SUBSCRIBE