Pretax profits climbed by 51% to €1.48m at Druids Glen ahead of sale 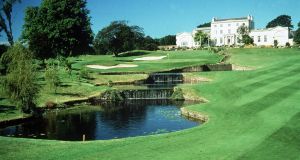 The profits came as revenues at Druids Glen increased by 5 per cent from €12.87 million to €13.5 million.

Pre-tax profits at the five star Druids Glen hotel and resort in Co Wicklow last year increased by 51 per cent to €1.48 million.

Last year’s profit increase came ahead of the resort being sold for €45 million in June to the Neville Hotels group.

The resort, which has hosted four Irish Open golf championships, was until last June owned by three Irish families – the Lappins, the Hurleys and the Flinns.

According to the directors’ report for the Druids Glen company, Obalus Hotel Company Ltd, the business “traded strongly in 2018 reporting an operating profit of €1.5 million”.

The company recorded post-tax profits of €1.29 million after paying corporation tax of €187,919.

Numbers employed at the hotel and resort last year grew from 221 to 228 and staff costs increased from €5.1 million to €5.5 million.

Formerly operated by Marriott, Druids Glen first opened in 1995, and is located on a 349-acre site in north Wicklow.