John Rocha-designed hotel increased annual profits by almost 49 per cent to above €2.75m 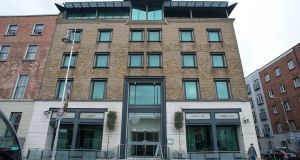 The Morrison was the first major Dublin hotel to have its secured loans put up for sale by Nama. Photograph: Dave Meehan

Profits sharply increased last year at the luxury Morrison hotel on the riverside quays in Dublin city centre, according to recently filed accounts.

The John Rocha-designed hotel, which is owned by Russia’s richest woman, Elena Baturina, increased its annual profits by almost 49 per cent to above €2.75 million, according to its operating company, Swift Row.

Sales at the hotel rose more modestly, up 6 per cent in 2018 to €14.16 million. The jump in bottom-line profits appears to have been enabled by stringent cost control, as well as a cessation in the extraction of dividends from the hotel.

In the three years prior to 2018, Ms Baturina’s companies had taken dividends from the Morrison totalling €2.5 million. The hotel retains a cash pile of almost €4 million, and has accumulated profits under Ms Baturina’s ownership of €5.1 million.

The Morrison was originally developed 23 years ago by the late publican, Hugh O’Regan. He lost control of it during the last financial crash and the Morrison eventually ended up in Nama.

It was the first major Dublin hotel to have its secured loans put up for sale by the State agency at the nadir of the property crash. Ms Baturina’s Austrian group, Inteco Beteiligungs, paid €22 million for it in 2012. She later poured €7 million into a revamp of the property.

A one-time construction magnate in Russia, Ms Baturina is married to Yury Luzkhkov, who was the mayor of Moscow for many years until 2010. Her other assets include European renewable energy facilities, as well as hotels in Russia and Austria. According to Forbes, she is worth $1.2 billion (€1.08 billion).

1 NatWest considers closing Ulster Bank in the Republic
2 Mark Paul: Government faces dilemma on which businesses to save
3 Ulster Bank could close, consumers remain cautious, and Decathlon booms
4 Has NatWest finally run out of patience with Ulster Bank?
5 TikTok weighs plan for up to 5,000 workers in Dublin offices
6 ‘I just thought it sounded exciting and different’
7 Career path blocked by Covid? Time to take a new direction
8 Gabriel Makhlouf: ‘A full second lockdown would be very serious for the economy’
9 How Ireland managed to green the White House
10 Dublin-based Fenergo considers $1.5bn listing
Real news has value SUBSCRIBE