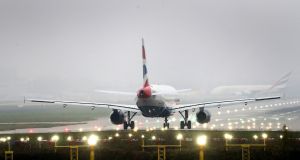 British Airways has agreed a new pay deal with its pilots’ union, heading off the risk of Christmas strikes. Photograph: Gareth Fuller/PA Wire

British Airways has agreed a new pay deal with its pilots’ union, heading off the risk of Christmas strikes as AerLingus’s sister airline looks to end one of the most damaging industrial disputes in its history.

As part of the agreement, BA agreed to an insert an inflation protection clause to its previous pay offer of an 11.5 per cent rise over three years. It also offered improvements to working conditions, rostering and flight bonuses.

In a union email seen by the Financial TimeT, Balpa, which represents the majority of BA’s pilots, said it was recommending the new offer to its members. A ballot of BA’s pilots will now take place in the coming days to vote on the new deal.

If pilots vote in favour of the proposal, it will put an end to a costly and turbulent few months for BA that saw it hit by the first pilots’ strike in the airline’s history. The 48-hour walkout in September saw 2,325 flights cancelled, costing BA’s parent group IAG about €137 million.

Over the past month, Alex Cruz, BA’s chief executive, has come under pressure to resolve the dispute quickly from Willie Walsh, who heads up IAG.

In addition to the inflation protection, the airline offered to restore the generous travel perks that it had stripped from pilots ahead of a mass two-day walkout in September. Both BA and the Balpa union have agreed to drop legal action.

However, the offer is also a compromise by the union as it has not managed to secure a significant pay rise or a profit-share scheme that it had been pushing for.

Under the previous deal, BA had offered pilots a pay increase of 11.5 per cent over three years – an offer that both the Unite and GMB trade unions, which represent nearly 90 per cent of all BA workers, accepted in the summer.

When contacted by the FT, Balpa said: “We can confirm that Balpa, BA and ACAS [the arbitration service] have put together a new pay and conditions proposal and subject to final checks Balpa expects it will shortly be consulting its 4,000 BA members on them.”

The carrier has come under fire following a number of high-profile glitches in recent years, including a technical issue this week that caused a handful of flight cancellations and long delays. It suffered a major data breach last year and a severe systems failure in 2017 that resulted in hundreds of flights being cancelled.

It has also been on the receiving end of anger from customers over its handling of the two-day strike action by pilots, which saw almost all of the airline’s flights cancelled during the walkout.

Last month, IAG warned the strike action had hit profits. In the three months to the end of September, IAG reported a 7 per cent fall in operating profit to €1.43 billion. –Copyright The Financial Times Limited 2019