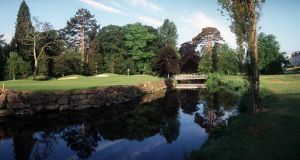 The K Club had been on the market since last year.

Veteran businessman Michael Smurfit has declared it is “time to move on”, as he confirmed on Tuesday he has struck a deal to sell the five-star K Club golf resort. Sources suggested the sale price is in the region of €70 million.

Mr Smurfit has agreed to sell the 550-acre Straffan estate, including its luxury 134-bed hotel and two championship golf courses, to Dublin-based nursing homes operator, Michael Fetherston, whose interest was first reported by The Irish Times in September. The deal is expected to close early next year.

“Since opening in 1991, The K Club has and continues to be an incredible source of pride for my family, its members and its wonderful team,” said Mr Smurfit. “There is always a time to move on. I firmly believe that the K Club’s long-term interests are better served under a new owner and [Mr Fetherston] is uniquely placed to build on the heritage and success of The K Club.”

Mr Fetherston operates the TLC nursing homes group, which has five residential facilities in the greater Dublin area. A low-profile businessman, he has also for many years been associated with various hospitality industry investments, such as the Clifton Court hotel on Dublin’s quays. He has also owned bars in Raheny and in the city, including the now closed Viva on South William Street.

Mr Fetherston told The Irish Times he believes he has purchased a “unique and iconic asset” in the K Club, which famously hosted the Ryder Cup in 2006.

“We are excited by the opportunities presented and we will build on The K Club’s unparalleled reputation as both a hotel and as a golf resort,” he said.

The K Club had been on the market since last year. Mr Smurfit, who was formerly the chief executive of the forerunner to global packaging group Smurfit Kappa, sought offers of around €80 million.

Bishopscourt Investments, the company that owns the K Club, was once a 50-50 joint venture between Mr Smurfit and developer Gerry Gannon. Although Mr Smurfit has been associated with the resort since its inception, Bishopscourt took full control in 2005 for €97 million. Mr Smurfit bought out Mr Gannon’s interest in 2011.

Accounts for Bishopscourt show that sales at the resort slipped by 7 per cent to about €17.5 million. It made a loss for the year of €3.7 million. A note to the accounts, which were signed off at the end of September, said the directors had valued the complex during 2018 at about €65.1 million. Mr Smurfit is owed about €56 million by Bishopscourt.