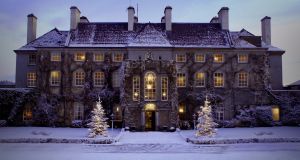 A picture of the Mount Juliet hotel and golf resort in Co Kilkenny.

The company that operates the five-star Mount Juliet hotel and golf resort in Co Kilkenny narrowed its losses last year by 7 per cent to €2.99 million.

Accounts for Mount Juliet Unlimited show that it recorded a reduction in pre-tax losses as revenues surged by 35 per cent to €11.59 million.

The 500-acre Co Kilkenny estate was acquired by Tetrarch and businessman Emmet O’Neill in a €15 million deal in 2014. It will stage the 2020 Dubai Duty Free Irish Open, the fourth time that the Thomastown venue has staged the annual event.

The directors described the trading performance for the year as satisfactory. The loss took account of non cash depreciation costs of €1.4 million and interest payments of €1.6 million.

The accounts show that €1 million of the interest payments was on shareholder loans while the bulk of the remainder was on bank debts. The loss also takes account of a €420,699 loss on the disposal of a fixed asset.

The number of people employed at Mount Juliet last year increased from 102 to 118 as staff costs increased from €4.9 million to €5.76 million. The company had a shareholders’ deficit of €8.8 million at the year end.

Coronavirus uncertainty hangs over Serie A as Juve host Inter

1 How well paid do you think you are? Here’s how to work it out
2 Life as a Facebook moderator: ‘People are awful. This is what my job has taught me’
3 Coronavirus and the etiquette of working from home
4 AIB to sell more than 500 ATMs to Brink’s
5 Facebook forced by DPC to suspend use of election day voting tool across EU
6 Citi names Limerick native Cecilia Ronan European unit chief
7 Flight attendent seeks High Court injunction against Aer Lingus
8 Dublin workers earn on average 15% more than rest of State
9 Wealthy investors’ legal challenge against Revenue fails
10 Irish in-flight entertainment firm blames coronavirus for closure
Real news has value SUBSCRIBE