Air fares could rise 30% due to EU tax increases 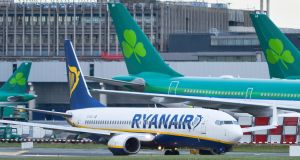 It is calculated that a 30% increase in air fares would cut traffic by around the same figure. Photograph: Getty Images

Air travellers face potential fare increases of up to 30 per cent in coming years as the EU increases taxes on aviation, high-profile economist Colm McCarthy has warned.

Mr McCarthy, who is also a director of the State airports company DAA, told a tourism industry conference at the weekend that the European Commission wants to hit jet kerosene with a a 33 cent a litre carbon tax.

Speaking at the University of Limerick tourism policy workshop at Dromoland Castle in Co Clare, Mr McCarthy noted that Brussels also wanted to end a VAT exemption for airline tickets.

The proposed carbon tax on jet fuel would add 12 per cent to tickets ,while ending the VAT exemption could bring the overall increase to 30 per cent.

The Republic stopped taxing air travel in 2013, so customers would feel the full impact of VAT should it be imposed. Most other EU states charge airline passengers in some way or other.

However, Mr McCarthy said that it could take 10 years to agree and impose these new taxes.

The commission would first charge flights within Europe and subsequently long-haul journeys. The economist calculated that a 30 per cent increase in air fares would cut traffic by around the same figure.

He predicted that a phased introduction of the taxes would mean zero airline growth for 10 years rather than an abrupt decline.

Low-cost, short-haul airlines such as Irish carrier Ryanair would be most vulnerable if the EU were to introduce the new taxes.

Mr McCarthy told the conference that Brussels was sceptical of airlines’ own schemes for easing their impact on the environment.These include the Carbon Offsetting and Reduction Scheme for International Aviation.

Mr McCarthy argued that EU governments would find it difficult to regulate greenhouse gas emissions and impose carbon taxes if aviation were to get a “free pass”.