Barcelona decision based on strikes being beyond an airline’s control 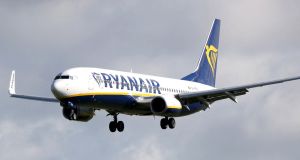 Ryanair this week said it could not rule out further disruptions in the final three months of the year. Photograph: PA

Ryanair has welcomed a ruling by the commercial court in Barcelona that no compensation should be paid to customers whose flights are cancelled due to strike action.

The ruling, which was the ninth to be made in Spanish courts in recent months, declared that compensation under what’s known as EU261 legislation should not be given in situations where flights are cancelled because of internal strike action, as they are deemed to be beyond an airline’s control.

Ryanair, which this week issued a profit warning due in part to concerns over ongoing strike action, claimed that if the industrial action was within its control, “there would be no strikes and no cancellations”.

Ryanair added that it fully complies with EU261 legislation, a section of European law that guarantees passengers compensation in the event of most flight delays and cancellations.

The airline has long rallied against what chief executive Michael O’Leary has called a “ridiculous” piece of legislation.

Under the rules, refreshments must be provided free of charge to customers if a flight is delayed by more than two hours. If the delay is more than three hours, passengers are entitled to compensation of at least €250. If a flight is cancelled, they should be given a choice of either a full refund or a re-routing at “the earliest opportunity,” as well as compensation, if the cancellation was at short notice.

Ryanair, which has been hit by a wave of strikes in recent months, this week said it could not rule out further disruptions in the final three months of the year.

As many as 30,000 passengers were affected by strike action on one day alone late last month as Ryanair was forced to cancel 190 flights.

Shares in the airline plunged 12.5 per cent in Dublin on Monday after it issued a profit warning and lowered its earnings guidance.

The company’s shares were largely unchanged at €11.64 in afternoon trading in Dublin on Thursday.