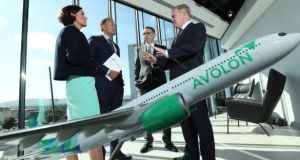 The number of aircraft owned and managed by Dublin-based lessor Avolon rose by 1 per cent in the third quarter to 571.

The company said it also had total orders and commitments for 319 new technology aircraft. This compares to 348 for the same three-month period a year earlier.

Avolon said airline customers rose 3 per cent to 156 as it executed a total of 39 lease transactions and delivered 14 aircraft to clients.

The company also sold 16 aircraft during the third quarter, including the sale of four aircraft to Jade Aviation, Avolon’s joint venture with Cinda.

Orix Corporation recently agreed to buy 30 per cent of Avolon through the Japanese group’s Dublin-based aviation subsidiary for $2.2 billion (€1.9 billion) from Bohai Capital, part of China’s HNA group. The price paid for the stake, which was based on net asset value as of March 31st, implies an Avolon enterprise value of $23.7 billion.

Avolon said it paid a previously announced dividend of $240 million during the quarter to facilitate the repayment of all outstanding intercompany loans between the company and its parent Bohai, as part of the pre-closing sequence for Orix’s stake.

During the quarter it also raised incremental new debt capital of $2.1 billion and repaid $365 million in bills as part of an object to increase the level of unencumbered assets in the company.