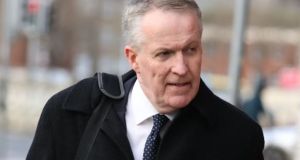 In fairness, there were plenty of confused people sitting in Court Five trying to digest just exactly what the judge’s ruling meant.

It was immediately clear the judge had dismissed Ryanair’s attempt to enforce a non-compete clause against Bellew. What was still puzzling onlookers was whether this meant Bellew would be permitted to start working for EasyJet or if he’d have to wait a while longer.

As it turned out, with Ryanair having failed to file for an injunction, Bellew is free to start his new role on January 1st.

Ryanair issued a statement immediately after the ruling, saying it would appeal the judge’s decision to dismiss its case. But the feeling in Court Five at least was that, unless the airline found a highly sympathetic judge who would be prepared to take time out from their Christmas holidays to hear their complaints – which seems highly unlikely – it won’t be able to stop Bellew from moving on.

And moving on was exactly what the former Malaysia Airlines chief executive did on Monday, disappearing quickly after the ruling was read out to avoid journalists.

Having reportedly been told he was “f**king useless” by Ryanair boss Michael O’Leary and made to feel like “a dead man walking” in his own words, Bellew has received the best Christmas gift he could have asked for.

As Mr Justice Allen noted at the start of his summing up, it has been a “hard-fought” battle between Ryanair and its former COO over an eight-day hearing in the High Court. Neither side has come out looking good from the case.

The judge was happy that Bellew knew what he was signing when he agreed the non-compete clause. The get out for him was that Ryanair’s attempts to cover all eventualities backfired as the judge ruled the clause was so broad as to be unenforceable.

For the airline, the holiday season now promises to be busy as it scrambles to reword its executive non-compete lock-ins before anyone else decides to follow Bellew out the door.

9 Can the Government afford to cut inheritance tax?