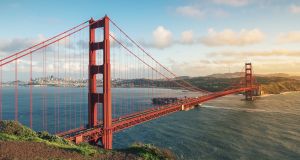 United, which also operates services to Chicago, Newark and Washington DC from Dublin, said it will operate the new route with a Boeing 787-8 Dreamliner.

“Dublin and Silicon Valley are two regions synonymous with big tech,” said United’s vice president of international network Patrick Quayle. “Many global tech companies have a major footprint in both regions, and they need a carrier with an extensive worldwide network to help conveniently connect their business.”

Aer Lingus also operates a daily non-stop service to San Francisco from Dublin, having relaunched the route in 2014 after it was pulled during the recession.

“This new route will further grow tourism and trade between Ireland and the US and provide greater choice and flexibility for both business and leisure passengers, said Dublin airport managing director Vincent Harrison.