Wicklow businesswoman Lorraine Sweeney has teamed up with her daughter Adrienne Stewart in the €2.5m investment 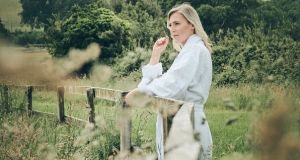 The grounds of the 32-bedroom Powerscourt Springs hotel which will open on July 20th in Coolakay, a picturesque area not far from Powerscourt waterfall

High-profile Wicklow businesswoman Lorraine Sweeney has teamed up with her daughter Adrienne Stewart to defy the pandemic gloom by opening a new “wellness hotel” in a €2.5 million investment.

The 32-bedroom Powerscourt Springs hotel will open on July 20th in Coolakay, a picturesque area not far from Powerscourt waterfall just outside the Wicklow village of Enniskerry.

Ms Sweeney bought the property, which lies on grounds of 38 acres, last year from the National Asset Management Agency (Nama). Ms Stewart, who also runs the Rainforest spa on the grounds of the family’s local Summerhill House hotel, is leading the project, and is a director of the business alongside her mother.

The venue previously traded as the Powerscourt Springs health farm during the Celtic Tiger years, before it closed in 2008 after its then owners tried to sell it for €12 million.

Ms Stewart, a former Today FM journalist, said they were considering “wrapping up the project” until 2021 after the virus pandemic hit. They decided to persevere and accelerated it when former taoiseach Leo Varadkar announced the State’s Reopening Ireland economic plan in June.

“We decided to plough ahead and go for it. We know it is a risk – a calculated risk. But coming out of a virus pandemic, we though a health and wellness hotel would be exactly what the domestic market needs,” said Ms Stewart, who also reopens her nearby Rainforest spa on the same day as the new hotel.

The business will initially open with a staff of 20, offering services such as spa treatments, yoga and meditation, in addition to operating as a hotel.

No children are allowed, and it will cater for bookings of adults only. It will be targeted solely at the domestic market initially, but Ms Stewart said it would seek out European groups that come to Ireland for “retreats” once travel restrictions ease.

The hotel also includes a hydrotherapy pool and steam rooms, although the outdoor hot tubs will remain closed for now, she says, because of social distancing concerns.

It also includes tennis courts and an “eco-trail” on the grounds, where bees will be kept, and it will also have its own vegetable garden.

The food offering is tailored to cater for vegetarians and vegans for health reasons, but Ms Stewart said the hotel would still operate a full cocktail bar. “Let’s be realistic. People will be coming here with friends on breaks to get away from their children.”

Ms Stewart insists most other spa hotels are “an accommodation business with a spa tacked on”, while she says the ethos of Powerscourt Springs is centred around incorporating the concept of wellness throughout the property. Yoga and guided meditation are included for all guests. It will also offer mental health coaching and counselling services.

“Everything just stopped in business when the virus arrived and lockdown came in. But we began to see the virus pandemic as an opportunity and not a threat. It was almost a snap decision to go on with the opening. But health will be top of people’s concerns.”

Ms Sweeney’s other business include several hotels in north Wicklow, such as Summerhill, and the Esplanade and Wilton hotels in Bray. She also operates a number of foodservice businesses in Dublin, and ran the café in Clerys before the department store closed in 2015.

British economic output declines by record 20.4 per cent 07:39
Glanbia sees sharp decline in earnings due to Covid-19 crisis 07:34
AIB’s mortgage blushes; Cairn’s new home profits; and dog days at Arrow 06:21
Objectors stall production of enough timber for 1,000 houses 05:31
Moving in and out of lockdown is a recipe for economic disaster 05:30