From the lack of targeted supports to the fiasco over quarantine, it has been sold short 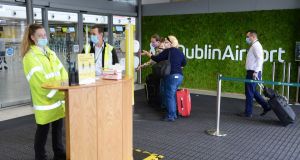 Dublin Airport: If the last Government was so adamant that nobody must fly, why did it let airlines continue to sell tickets? Photograph: Dara Mac Dónaill

There is a recent tendency on this side of the Irish Sea to revel in the apparent superiority of our political system compared to our nearest neighbour to the east. And, at times, Britain seems to have gone out of its way to justify some of this new-found Irish smugness, un-Irish as it may be.

Brexit and coronavirus are two examples. Objectively, it does seem likely that the British really have shot their own proverbials off by leaving the European Union for little gain, and much pain. Meanwhile, its Covid-19 death rate per million citizens is not too far off twice the level here in the Republic.

But, flawed as the British political system may be, occasionally it still retains the ability to move with remarkable speed and clarity to address important issues that are fudged over here. Contrast, for example, the two governments’ respective approaches this week to addressing the issue of youth unemployment by propping up an obvious target sector, tourism and hospitality.

While the British swiftly axed their tourism VAT rate to 5 per cent and introduced vouchers for consumers to give hospitality a quick fillip in August, politicians here have cooked up a confused stew of decisions, policy proposals and flown kites for the sector.

There is often a sniffiness at the highest levels of the State towards tourism, which, together with hospitality, was among its largest employers with 265,000 workers. This ambivalent culture is safe under the new Government. That was evident when ministerial responsibility for tourism – the industry clearly most imperilled by the virus – was dumped into Catherine Martin’s luckybag of frivolous allsorts. The sector rightly felt cast aside as an irrelevance.

The last government didn’t treat it much better. Ministers could not reasonably have been expected to get everything right in their virus response, given the breadth and scale of the crisis. But it was never pre-ordained that the confusion, anxiety and mixed-messaging we saw in recent weeks over the issue of air travel had to occur, compounding the already huge economic damage.

If the last government was so adamant that nobody must fly, why did it let airlines continue to sell tickets? Why did it not order the cancellation of flights weeks ago so that passengers could claim refunds – instead of them risking losing hundreds or thousands of euro cancelling now to assuage the nervousness of some members of the medical profession over travel?

Why is there still no testing infrastructure at airports if catching the virus at borders is all-important? Why have we scaled down our testing and tracing system in recent weeks, after hyperventilating about building it out for months? Couldn’t it be redirected towards making travel safer?

Why the slow bicycle race over advising the wearing of masks when Asian countries have known since Sars, 17 years ago, that they help? Why did Irish ministers not bang the drum in Brussels about their belief in the unavoidably lethal nature of flying, where every other country in Europe clearly holds a different view? Other nations “follow the science” too.

It is unfortunate that the tourism and travel sector gets treated in this slapdash way by the politicians. Such organisational flakiness is rarely inflicted upon agriculture, or the Irish outposts of US tech giants, or the manufacturing sector. And the supposedly useless Brits would never treat their industry this way.

Perhaps we shouldn’t blame the Government alone. Travel and tourism is too often seen by the public and by opinion formers as a frivolous pastime rather than a serious industry. There is ample evidence for this in the way the industry has been blithely offered up as an economic sacrifice for a travel quarantining strategy that is unique in the European Union.

Most of the media noise suggesting Ireland should effectively ban international travel for the foreseeable future has been driven by four medical experts.

Belfast man Gabriel Scally, president of public health of the Royal Society of Medicine, has been most vociferous in his exhortations to effectively seal the State’s borders, regardless of the economic consequences. Gerry Killeen, a UCC expert on disease control, and Anthony Staines, a DCU professor of public health, have also been prominent.

More nuanced commentary has come from Tomás Ryan of Trinity College, who supports mandatory quarantining. But at least he seems more open to discussing the wider economic impact than his colleagues. He also correctly highlights that Ireland could ease things if it did better on building capacity for swift testing and contact tracing.

Some capitalised on the uncertainty of the handover phase between governments in recent weeks to seize the airwaves and drive home their message that we face a binary choice between having some air travel and a catastrophic second wave.

Their interventions also fuelled the tanks of social media’s shaming culture. Many people are now scared to travel – in or out – for fear of being bullied over it. That is not healthy for public discourse.

Incidentally, not everyone who wants to fly safely is on some bucket-and-spade holiday. Many people want to visit relatives abroad whom they haven’t seen in months. And some – shock horror for the judgmental social media brigade – even want to travel to do business.

When the bills roll in for the virus in the months ahead, these people will be taken less for granted. That is guaranteed. How else will we pay wages of those in the public sector, such as academics?

But the damage is done. The new Government has bought into the binary narrative peddled by medics, with little consideration for the economic consequences. It is also prevaricating over providing sufficient supports for the sector at home.

There will be little or no inbound tourism this year as long any form of quarantine exists. Six weeks of drenched domestic tourism will barely make up for a sliver of it. Enough confusion has been sown to scupper most outbound travel, although there is admittedly little economic damage from that.

Here is the big, unanswered question for those who want Ireland to seal off its borders and to hell with the wider economic damage: what then? What is the exit strategy from this isolationist policy? How does Ireland climb down off that limb in the absence of a vaccine?

In the meantime, the tourism industry is reduced to ashes. It deserves attention and proper help.