Cottages.com has been selling Irish accommodation to British tourists for 26 years 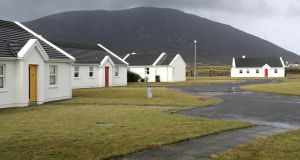 Holiday homes on Achill Island. The self-catering sector has been dealt another blow by the exit of British operator Cottages.com from the Irish market. Photograph: Cyril Byrne

One of Europe’s largest holiday rental businesses has announced that it is pulling out of Ireland after 26 years in another blow for the country’s reeling tourism sector.

Cottages. com organises the rental of self-catering units, almost exclusively to British holidaymakers, one of Ireland’s most important markets for tourists.

The company’s parent group, Vacation Rental (UK) Ltd, has sent letters to hundreds of property owners in Ireland telling them that it will no longer operate here from the end of this year.

“In light of Covid-19, we have had to review our business model and, as a result, will cease to trade in and will permanently suspend sale of properties in both Northern and the Republic of Ireland at the end of this year,” the company wrote in a letter signed by its vice-president of property recruitment, Shelley D’Arcy.

“This means we are hereby serving notice to terminate the agreement between us. Accordingly, your property (or properties) will not be advertised or available for booking on our websites.”

The company said it would honour all bookings in what has already been a lockdown-ravaged tourist season in 2020.

“It’s a big blow for the owners affected,” said Jacinta Doolan, president of the Irish Self-Catering Federation, which represents the sector. “Anyone who pulls out of Ireland from the UK market is a major blow. But if this had been a few years ago when they had 900 Irish properties on their books, it would have been a really major blow.”

Numbers have declined in recent years, she said, as new platforms, including Booking. com and Airbnb have emerged, and owners look to make their properties available on multiple platforms.

Cottages.com traditionally required exclusive agency deals with property owners until recently, a move that would leave some owners more exposed. Ms Doolan said owners affected by the pullout would need to look at spreading their business across multiple platforms.

But she was upbeat about the sector’s medium-term outlook. “Self-catering is flavour of the month these days and, for 2021/22, the overseas market is going crazy for self-catering,” she said.

Failte Ireland said the decision of Cottages.com to exit the Irish market was a blow. “Self-catering is hugely important for Irish tourism particularly now at this time of great crisis for the industry. There has been a steady growth in self-catering holidays, especially in recent years. The effect of Covid-19 on the Irish tourism sector has been catastrophic, and this news is a further blow,” a spokesperson for the State agency said.

Cottages.com markets self-catering accommodation in Britain, Ireland, Italy and France. According to its website, it handles more than 21,000 properties in those markets and caters for up to one million holidaymakers a year on an agency basis.

Industry sources said the company was only pulling out of Ireland, and its other markets would not be affected. The company promoted holiday homes in 24 counties in the Republic and four in Northern Ireland.

Vacation Rentals (UK) operates as part of the Awaze group, which says it is the largest managed vacation rentals and holiday resorts business in Europe.

1 State’s biggest landlord records 30% rise in rental income
2 Irish tourism must also help itself to survive the pandemic
3 Trump signs executive orders banning TikTok and WeChat
4 What will the office market look like after the great remote working experiment?
5 ‘Saudi Arabia is where the opportunities will happen in future’
6 More than 1,200 tracker mortgage complaints still awaiting ombudsman ruling
7 Project Eagle: What was it and why is it in the news?
8 How your country’s history affects the way you think
9 Two men face fraud charges over £1.2bn sale of Nama’s NI loans
10 Marlet secures €65m from AIB for Dublin docklands build-to-rent scheme
Real news has value SUBSCRIBE