Representative groups call for reduction in VAT on alcohol to 9% 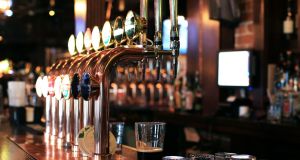 The drinks sector could shed about 22,500 jobs this year with pub sales expected to fall by at least half in the second half of the year, a report commissioned by industry groups suggests.

The warning comes as the Government warns it “may take further steps now or in considering the next phase of lifting of restrictions if necessary”after a weekend in which large crowds were observed in Dublin and outside some pubs. A Department of Health spokeswoman said that Government are monitoring the situation.

The report, commissioned by the Licensed Vintners Association (LVA), the Vintners Federation of Ireland (VFI) and Drinks Ireland, forecasts that even on current reopening plans, pub alcohol sales will fall by at least 50 per cent in the second half of this year.

This, the report said, will lead to the loss of the thousands of jobs in addition to those in supporting trades like catering, security and entertainment.

The report, written Dublin City University (DCU) economist Anthony Foley, noted that about 50,000 people are employed in the drinks industry.

It calls for a temporary reduction in the hospitality VAT rate to 9 per cent from the current rate of 23 per cent. The cost to the exchequer of such a measure this year will be about €143 million, the report said.

“The measure is being sought to support pubs – 7,000 businesses nationwide – who will struggle in the short term until they can resume operating and viably trade at increasing levels of capacity in 2021 and beyond.”

“Most bars will reopen with only 40 per cent of their customers, indefinitely,” said Padraig Cribben, chief executive of the VFI. “A reduction in the VAT on alcohol would deliver an immediate support to these businesses and instantly improve their commerciality.”