Minister to intervene in row over access to historic island 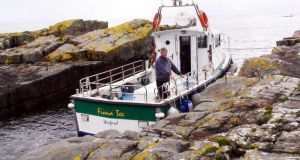 Keith Clarke has been bringing visitors to Inishmurray Island, seven kilometres off the coast of Sligo, for 32 years, but says he was devastated last month to be told he risked prosecution if he continued to do so.

The island is famous for having one of Ireland’s best-preserved early monastic sites, which was established by St Molaise in the sixth century. It also once enjoyed a reputation for high-quality poteen, so popular that early in the last century John Power of Power’s Whiskey arrived there on a fact-finding mission.

But now the Marine Survey Office (MSO) attached to the Department of Transport, Tourism and Sport has warned a small number of commercial boat owners who provide day trips to the island that this practice must cease with immediate effect.

The MSO said this was “due to concerns for safety during embarking and disembarking” at the island.

It insisted that the “recognised landing”, a natural harbour, is “wholly unsuitable for landing passengers”. But locals say there has never been an accident, before or since the last of the islanders left in 1948.

Mr Clarke, skipper of the MV Fiona Tee said the safety record is so good because of the local knowledge of the boat operators, but he warned that private operators may now take a chance and land there. “I know it like the back of my hand. I only did seven trips last summer. Some summers I do 20. It all depends on the swell,” he said.

When the row was raised in the Dáil last week, Minister of State for Tourism and Sport Brendan Griffin promised to visit the island.

Tomorrow he will meet Mr Clarke and some of the other boat operators in Sligo, in a bid to resolve the impasse.

“This is very awkward for me,” said Mr Clarke, who is regularly hired by former islanders or descendants of former islanders who want to visit their family homes. He has had bookings since last October for this summer.

The 62-year-old, who can look out on the island from his kitchen window at his home near Grange, took former US ambassador Jean Kennedy Smith to Inishmurray. “She had wanted to go for years,” he said. Last February he ferried an elderly priest who had travelled from the US to see the island. “He had wanted all his life to say Mass in a beehive hut,” he said.

Mr Clarke said he was warned by an official from the department that if he made such a trip again he would be liable to be arrested by gardaí.

Local Independent county councillor Declan Bree said that for 1,500 years islanders and visitors had embarked and disembarked safely at the natural harbours, particularly at Clashymore. “In days gone by, horses, sheep, cattle and kegs of the best illicit whiskey were transported from the natural harbours on the island,” he said.

Cllr Bree’s motion calling on Minister for Transport Shane Ross to provide a suitable landing facility on the island “as a matter of urgency” was unanimously passed by the council earlier this month.

Local historian Joe McGowan who has published a book, Inishmurray: Island Voices, about the island, said he was “aghast” at the travel ban. “I took people out there for decades. I am aghast that some pen-pusher in the Civil Service can do this,” he said.

A spokesman for the department said officials had carried out an assessment of the landing facilities at Inishmurray Island in 2008 and had deemed them unsuitable for safety reasons.

“As a consequence, no passenger licences have been issued which include Inishmurray on their plying limits,” he said. The department said no such licences would be issued until the appropriate landing facility had been provided. This was a matter for the owners and/or the local authority, it added.