Profit at Hostelworld rises to €12m as bookings up 6% 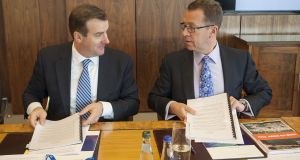 The company said adjusted earnings before interest, taxation, depreciation and amortisation rose 10 per cent to €26.4 million, compared with €23.9 million the year before, with the margin remaining consistent at 30 per cent.

Chief executive Feargal Mooney said the company was pleased with the results, noting the 6 per cent growth in overall bookings.

Adjusted profit after tax was up 12 per cent to €21.7 million, and 16 per cent at constant currency.

The reported figures for 2016 included impairment charges of €8.1 million. Mr Mooney said this was related to its previous purchase of rival HostelBookers, with Hostelworld getting the benefit from the transaction.

Average booking value was €11.60, flat compared with the prior year but 2 per cent higher on a constant currency basis. Hostelworld had cash balances of €21.3 million at the end of December, down from €24.6 million in 2016.

The flagship Hostelworld website saw bookings growth of 13 per cent over the year.

Booking on the move

Mobile bookings continued to rise, accounting for 54 per cent of the group’s bookings. Mr Mooney said the mobile channel was a very important one for the firm, as many of its users were booking accommodation while on the move.

Among the new features tested by Hostelworld over the year was a free cancellation model.

“The results were very positive and encouraging,” Mr Mooney said, with the company planning to roll the feature out further. However, this will have an impact on 2018 figures. Under the current model, Hostelworld charges a non-refundable deposit to travellers that can be recognised in revenue figures; bookings made using the free cancellation tariffs will not have revenue recognised until the travel date has passed. Mr Mooney said by 2019 the figures would “catch up”.