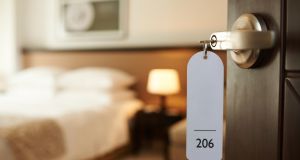 Occupancy and average room rate in Ireland increased in the first quarter according to data from STR. Photograph: iStock

Reviewing the performance of European hotels in the first quarter of this year, STR found that the average daily room rate of Ireland’s hotels increased 6.2 per cent on the same period last year to €113.67.

That increase far outstrips European growth of 2.6 per cent where the average daily rate (ADR) stood at €100.61 in the period.

In a similar vein, revenue per available room (RevPAR), a key metric calculated to incorporate both room rates and occupancy, in Ireland increased 9.7 per cent to €76.79. Again, both growth and the rate were higher than in Europe where RevPAR increased 4.8 per cent to €64.89.

Ireland’s occupancy rate was similarly buoyant in the period, increasing 3.4 per cent to 67.6 per cent occupancy. Europe’s average occupancy increased 2.2 per cent to 64.5 per cent.

“STR analysts note that performance is strong across the country, not just in the always popular Dublin, where RevPAR increased 7.8 per cent,” the company said.