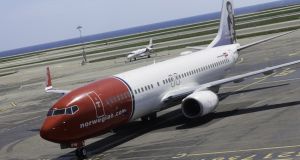 The High Court granted the carrier, which has its headquarters in Oslo, and its key Irish subsidiaries, which own most of its aircraft, interim protection from creditors this week.

An independent accountant’s report submitted to the court shows that winding up Norwegian Air Shuttle would wipe out most of its assets, leaving a $7.1 billion (€5.98 billion) shortfall, eliminating any chance of creditors collecting on the debts due to them.

Norwegian and its subsidiaries sought protection from creditors in the Irish court as its aircraft are held by companies registered and based in the Republic. The case is due back in court on December 7th.

The report, written by Ken Fennell, a partner in accountancy firm, Deloitte’s Dublin office, states that Norwegian has forecast that it will have used all its cash by March 2021, and does not have enough working capital to pay all its creditors.

However, the report says the companies have a reasonable prospect of survival if they take certain steps proposed by management, including renegotiating lease payments on their aircraft, deferring some loan repayments, cutting their fleet and cancelling future aircraft orders.

The three leasing companies own a total of total of 72 Boeing planes between them and owe creditors, including aircraft lessors and banks, $4.6 billion.

Mr Fennell’s report explains that NAI is an operating company, which holds an airline licence allowing the group to operate in the EU. Arctic and its subsidiaries are finance companies that own and lease aircraft to NAI and other group operating businesses.

The parent Norwegian Air Shuttle sells the flights and provides cash to its operating and finance subsidiaries as they need it. It also guarantees the group companies’ debts, which is why it had to seek court protection from creditors.

Arctic Aviation’s subsidiaries own 140 craft in total and owe their creditors $5.2 billion. This includes $2.1 billion for aircraft on order from manufacturers Airbus and Boeing.

Norwegian is renegotiating terms with the creditors of other Arctic subsidiaries that are not included in the court process.

If these talks do not succeed, those businesses could be wound up individually or brought into the examinership process at a later date.

The court’s interim grant of protection and appointment of Mr Wallace were the first steps in the latest bid to save Norwegian Air, whose financial woes worsened when Covid-19 slashed passenger numbers by 78 per cent.

If Justice Quinn confirms the appointment and extends the protection on December 7th, Mr Wallace will have up to 100 days to come up with a rescue plan, based on managements’ proposals.

Norwegian Air can continue trading during this period, but the pandemic has limited its flights to a handful of services in Scandinavia.

Irish aircraft leasing giant Aercap took shares in Norwegian in lieu of debt in a restructuring earlier this year. The company cut its stake this week to 9 per cent from 13.4 per cent. It did not comment.

Bank of China Aviation confirmed that it remained a creditor of Norwegian. It also took shares instead of some debt due to it and has since cut this stake to just below 10 per cent from 13 per cent.