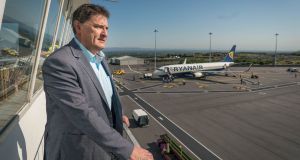 Joe Gilmore called on the Government to open an air corridor with UK regions with low levels of Covid-19 infection to aid Knock and the other regional airports. Photograph: Phocus

He told the Oireachtas Joint Committee on Transport and Communications Networks on Wednesday that the Co Mayo airport had lost close to €4 million this year while it had “a reduction in turnover of €11 million”.

Knock faces the suspension of Ryanair flights from this weekend until December 13th, as a collapse in bookings in the face of ongoing travel restrictions prompted the airline to cut services from regional airports.

Mr Gilmore told politicians that Ryanair would restore services to London airports, Stansted and Luton, next month. Knock hope that this will boost traffic there.

Pandemic flight restrictions have cut passenger numbers in Donegal, Kerry and Knock airports by around 90 per cent.

Mr Gilmore called on the Government to open an air corridor with UK regions with low levels of Covid-19 infection to aid Knock and the other regional airports, which depend heavily on traffic with Britain.

“This would be critical in supporting thousands of jobs in the SME sector and the tourism and hospitality sectors,” he said.

Mr Gilmore added that such a move would be crucial in facing the fallout from the pandemic and the challenges that would follow Brexit.

The UK is due to leave the EU on December 31st when an agreed transition phase ends.

The airport manager pointed out that three-quarters of Knock’s business is with Britain.

“If that market could be opened up and expedited, that would be of great benefit,” he said.

He told the committee that Knock had a marketing plan “ready to go” once travel opened up.

The airport had 800,000 passengers in 2019 and had hoped to lure more than 1 million this year before the pandemic struck.

Knock, Kerry and Donegal airports will benefit from an extra €6 million in State aid next year, following an announcement this week.

The Government had already earmarked €21.3 million for the three regional airports in Budget 2021.

The Department of Transport will invite the airports to apply for the cash under the schemes announced this week, and will then allocate the funds.

Basil Sheerin, chief financial officer of Kerry Airport, said that passenger numbers had fallen by 90 per cent on the 370,000 that had passed through there last year.

The airport relies heavily on Ryanair services. Mr Sheerin said that before the virus struck, the company had been in talks with different airlines about adding destinations in Britain, France, and possibly Italy.

1 Basic income for all: Has the Covid crisis given us a new economic model?
2 Direct sea routes to Europe offer certainty in choppy Brexit waters
3 ‘I don’t need to do any of this. . .I don’t actually need to work.’
4 Online shoppers face unwelcome tax surprise
5 Promontoria barred from pursuing doctor over Ulster Bank loan
6 Only way is up for Stripe as valuation skyrockets
7 ‘Make plans but don’t hold on to them too seriously’
8 Unilever’s Dutch and British arms merge after 90 years ahead of Brexit
9 Fiona Reddan: Who’s afraid of Revolut? Not AIB and BOI it seems
10 Anti-alcohol zeal of public health experts peppers reopening debate
Real news has value SUBSCRIBE