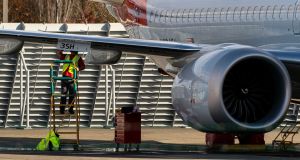 Regulators around the world grounded the Max in March 2019 after the crash of an Ethiopian Airlines jet. Photograph: Getty

The US Federal Aviation Administration issued an order on Wednesday to allow Boeing’s 737 Max to return to the skies, clearing the way for other regulators to follow and airlines to restore the plane to their schedules.

The move by US regulators, which had been expected, marks the beginning of the end of the worst crisis in Boeing’s century-long history. Two 737 Max crashes killed 346 people, and afterwards destroyed billions in Boeing’s market value, led to the departure of former chief executive Dennis Muilenburg and tarnished the reputation of one of the most storied US manufacturers.

Still, the aerospace company can no longer hope to rake in cash from speedy deliveries to eager customers. The Covid-19 pandemic has devastated the airline industry and damped demand for jets, slowing sales of Boeing’s massed inventory of 450 planes parked at Washington state airfields.

The FAA is requiring that Boeing change flight control software, known as the Manoeuvring Characteristics Augmentation System, or MCAS, which was a critical factor in the two fatal crashes which happened within five months. The software will be unable to activate repeatedly and can only do so with input from two sensors, instead of just one. The agency is also requiring changes to the plane’s wiring.

The FAA is requiring that pilots train to fly the Max in flight simulators, something Boeing avoided before the two crashes. It reversed its position in January. The US regulator also plans to inspect the jets for foreign objects such as rags or tools after some were found among grounded planes.

“The path that led us to this point was long and gruelling,” said Steve Dickson, FAA administrator. “We were never driven by a timeline but rather followed a methodical and deliberate safety process ... I can tell you now that I am 100 per cent comfortable with my family flying on [the aircraft].”

Ryanair has committed to buying 135 of the planes, with options for a further 75.

But families of the victims who were killed in the crashes in 2018 and 2019 say aviation regulators have done too little to assure the plane’s safety and urged potential passengers to steer clear. A lawsuit against Boeing pursued by many of the families from the second crash is ongoing.

“The flying public should avoid the Max when flying in the future,” said Michael Stumo, whose 24-year-old daughter Samya Stumo was killed last year when Ethiopian Airlines Flight 302 crashed six minutes after take-off. “It’s still a more dangerous aircraft than other modern planes.”

Aviation regulators worldwide grounded the Max in March 2019 after the crash in Ethiopia, five months after Lion Air Flight 610 crashed off the coast of Indonesia.

The flight crew manual for the Max included no mention of the new system because Boeing wanted to avoid changes to the plane that would lead the FAA to impose training requirements. Training for pilots is costly for airlines and would discourage them from buying the Max.

In January, US lawmakers released more than 100 pages of damaging internal messages that showed Boeing employees mocking both regulators and the Max. One said the aeroplane was “designed by clowns who in turn are supervised by monkeys”.

A congressional subcommittee released a report in September that condemned both the manufacturer and the FAA, which the subcommittee found had offloaded much of its regulatory authority to Boeing.

According to the report, the crashes “were the horrific culmination of a series of faulty technical assumptions by Boeing’s engineers, a lack of transparency on the part of Boeing’s management, and grossly insufficient oversight by the FAA - the pernicious result of regulatory capture on the part of the FAA with respect to its responsibilities to perform robust oversight of Boeing and to ensure the safety of the flying public”.

The US House of Representatives passed a bill on Tuesday that would strengthen the FAA’s ability to oversee aerospace manufacturers, and the US Senate is set to consider a similar, though less-stringent, bill on Wednesday.

Regulators in Europe, Canada and Brazil have indicated they are likely to lift grounding orders on the jet as well. China, which was first to ground the Max, has yet to offer a plan to do so. The country’s airlines are important customers for Boeing, but China is also trying to bolster the worldwide standing of its own commercial jet manufacturing industry.

Even as US regulators grant airlines the go-ahead to begin flying the Max, it will return slowly. American Airlines has said it will use the plane on flights between Miami and New York starting late next month. Other airlines have said they will not fly the plane until 2021.

David Calhoun, Boeing’s chief executive, said in a memo to employees on Wednesday that “we will never forget the 346 victims ... We will honour them by holding close the hard lessons learned from this chapter in our history to ensure accidents like these never happen again”. – Copyright The Financial Times Limited 2020.