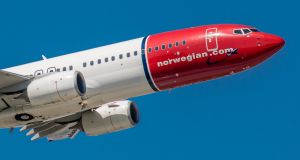 Norwegian said it was seeking court protection in the Republic because its aircraft assets are held here. Photograph: iStock

The Irish subsidiaries named their parent, Norwegian Air Shuttle, as a related company. The court granted all six entities interim protection from their creditors. The case is due back before Mr Justice Quinn on December 7th.

Norwegian Air went to the Irish High Court as its subsidiaries here hold most of its aircraft. Jacob Schram, its chief executive, argued that seeking Irish court protection to re-organise the business would benefit workers, customers and shareholders.

“Our aim is to find solutions with our stakeholders that will allow us to emerge as a financially stronger and secure airline,” he added.

Last week, Norway’s government refused to provide further financial aid to the support it gave the airline in May. This prompted some creditors to take action against the group, whose debts topped €6 billion at the end of September.

Reports yesterday said that Irish aircraft lessor, Aercap, which accepted Norwegian shares in a restructuring earlier this year in lieu of cash it was due, had cut its stake to 9 per cent from 13.4 per cent.

Norwegian’s move handed pivotal roles to the High Court and Mr Wallace in efforts to save the group, whose financial woes worsened when Covid-19 slashed passenger numbers by 78 per cent.

Many are rented from aircraft leasing companies which, along with banks, make up most of the group’s significant creditors.

While the High Court’s ruling stands, these creditors will not be able to enforce any security they have over the aircraft by repossessing them, thus allowing Norwegian Air to continue flying.

Wednesday’s proceedings were ex parte, meaning that only lawyers representing the companies seeking protection were heard. Other parties can make submissions when the case is back before the court.

If Mr Justice Quinn confirms Mr Wallace’s appointment and the court’s protection on December 7th, the accountant will have up to 100 days to come up with a rescue plan or “scheme of arrangement” to ensure Norwegian can continue trading. The High Court will then have to approve this.

An independent accountant’s report submitted to the court on Wednesday stated the companies had a reasonable prospect of survival if an examiner was appointed, a restructuring plan was fully implemented and they could source additional finance.

Mr Justice Quinn noted that the independent report said creditors, including leasing companies and lenders, would do better in a successful examinership than if the group was put into liquidation.

Norwegian Air employed more than 10,000 people and flew from 20 bases in 11 countries last year. Its operations are now limited to a few flights in Scandinavia but it needs €8.4 million a month to stay in business.

Third quarter revenues slumped 91 per cent, while operating losses rose to €590 million from €149 million in 2019.

The court heard that the loss of revenue meant the group was unable to make repayments to due to creditors.

1 Basic income for all: Has the Covid crisis given us a new economic model?
2 Promontoria barred from pursuing doctor over Ulster Bank loan
3 How long can Government afford to keep State pension age at 66?
4 Online shoppers face unwelcome tax surprise
5 ‘I don’t need to do any of this. . .I don’t actually need to work.’
6 Admission of mistake in Oxford vaccine dose raises doubts over reliability
7 Direct sea routes to Europe offer certainty in choppy Brexit waters
8 ‘Make plans but don’t hold on to them too seriously’
9 How to gift your child a house deposit . . . tax free
10 Unilever’s Dutch and British arms merge after 90 years ahead of Brexit
Real news has value SUBSCRIBE