Airline considers launching flights from Britain to US next year 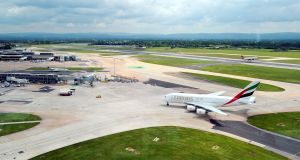 Aer Lingus has applied to Manchester Airport for slots – that is take off and landing times – to allow it launch flights from there to North America next summer. Photograph: Martin Rickett/PA Wire

Aer Lingus has applied for slots at Manchester Airport as it continues to consider launching transatlantic services from Britain next year.

It emerged on Thursday that Aer Lingus has applied to Manchester Airport for slots – that is take off and landing times – to allow it launch flights from there to North America next summer.

Aer Lingus is considering flying transatlantic routes from Britain next year while there is continued uncertainty over the Republic’s likely approach to air travel.

Consequently it is seeking the slots from Manchester as a contingency and may not take them up.

If it does take them up, the airline has new planes due that it can allocate to services from the UK airport.

Earlier this year, Aer Lingus sought tenders from UK airports to take two Airbus A321 long-range jets that it has based at Shannon for use mainly on US routes.

However, since then, it has committed to fly from the mid-western gateway to both Boston and John F Kennedy International Airport in New York next summer, as part of the schedule that it has since launched.

Airline executives recently warned the Oireachtas committee on transport that its summer 2021 schedule depended on recovery in air travel.

Tough Government Covid-19 travel restrictions, requiring most incoming passengers to self-isolate for 14 days after arriving here, forced Aer Lingus and other airlines to dramatically cut services in the Republic.

The Republic is continuing to insist that people arriving here show negative results from slower, more expensive PCR tests, even though many other EU countries accept the faster screening method.

“Aer Lingus wholly supports the EC’s recommendation for further consideration of the use of rapid antigen tests for travellers taking into account the latest scientific and technological developments in light of the epidemiological situation,” the airline’s statement said.

The Government recently confirmed that passengers from regions designated medium risk, or orange, under the EU’s traffic light travel system, can waive self-isolation if they have tested negative up to three days before travelling.

Ireland, Iceland, the Canary Islands and parts of Greece, Norway and Finland were designated orange in the latest update to the system on Thursday. All other European countries were considered high risk or red regions or lacking sufficient data to make a judgment.

From November 29th, those coming from red regions, the US and Canada, can waive self-isolation if they get tested in the Republic within five days of arrival.

However, Minister for Transport Eamon Ryan said health experts continued to advise that antigen testing was not suitable for international travel.