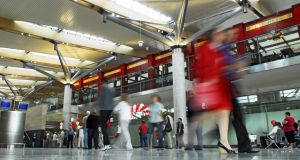 The Republic’s airports plan to provide virus screening for departing passengers as part of an EU scheme to accelerate the return of air travel.

Cork Airport, part of State company DAA, plans to open a centre that will provide tests approved by the Health Products Regulatory Authority.

Rocdoc, the private company providing the service, said its prices would start at €149 per test.

Passengers will pay for the test and results will be available “within a few hours”, the company said.

EU countries will increasingly require incoming passengers to show they have tested negative for Covid-19 in order to avoid quarantines and other restrictions.

From this week, the Republic is waiving the need for passengers from regions ranked “orange”– or medium risk – under the EU’s traffic light system to self-isolate for 14 days, if they have tested negative up to three days before arrival.

Mr Gilmore said that a private company would operate this at the Co Mayo airport, while passengers would pay at least €150 for the service.

Basil Sheerin, Kerry Airport’s chief financial officer, told the same committee that it was looking at getting a private company to offer pre-departure tests close to the airport, rather than on its premises.

He suggested that those tests could cost €80, adding that the airport wanted to keep the price as affordable as possible.

Government policy on testing is that PCR screening, which detects Covid’s genetic material, is the type most suitable for international travel. This is slower and more expensive than other tests used.

According to Eamon Ryan, the Minister for Transport, the advice is that faster, cheaper, tests, which detect antigens produced by the body’s immune system when the virus strikes, are not yet suitable for international travel.

However, the Minister has acknowledged that if that advice changes, the Government’s policy could change.

The EU’s traffic light system ranks regions as green, orange and red according to their Covid infection rates, with green as the lowest risk and red the highest.

Under the Republic’s current guidelines, travellers from green countries can move freely. From November 29th, those from red zones in the EU, or anyone from the US, can waive the 14-day self-isolation requirement, once they get a test showing a negative result within five days.