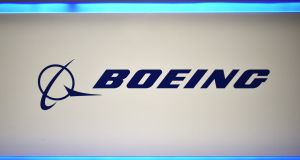 Despite industrial setbacks, Boeing shares were up about 2 per cent in premarket trading. Photograph: Mandel Ngan/AFP via Getty Images

Boeing cut production of its flagship Dreamliner and delayed the arrival of a successor to its 777 mini-jumbo on Wednesday, piling new pressures on a rejigged senior management team as the continued safety grounding of its 737 Max sliced third-quarter profits.

The world’s largest planemaker said it was also delaying plans to step up production on its money-spinning 737 line in the Seattle area, and would not hit a record-level 57 aircraft monthly until late 2020, months later than previously planned.

Despite the trio of industrial setbacks, Boeing shares were up about 2 per cent in premarket trading as its steady estimate of a 737 Max return in the fourth quarter appeared to be eclipsing the downside of the 787 production cut, an analyst said.

“The 787 cut appears to be mostly tied to China trade negotiations, which at least have the potential to improve over the next 12 months,” said Seaport Global analyst Josh Sullivan.

The profit slump and fresh setbacks capped a tumultuous week for the company, already in the eighth month of a deepening crisis over the grounding of its best-selling single-aisle following deadly crashes.

On Tuesday, the company ousted the top executive of its crucial aircraft division, Kevin McAllister, in an unexpected management shake-up related to the Max crisis that senior industry sources say puts chief executive Dennis Muilenburg squarely in the firing line in the event of further revelations or if the company fails to recover from the Max crisis.

Mr Muilenburg’s title of board chairman was stripped earlier this month.

“Our top priority remains the safe return to service of the 737 Max, and we’re making steady progress,” Mr Muilenburg said in a statement accompanying the results. Boeing has begun taking steps to increase safety oversight in its industrial operations and at the board level, he added. – Reuters