Passenger numbers rose by 5 per cent to just under 2.1 million 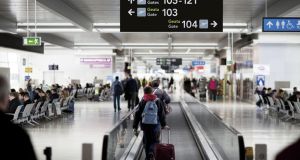 Departure gates in Dublin Airport, which has just had its best January in its 79-year history.

Dublin Airport enjoyed its best January performance on record with just under 2.1 million passengers travelling through the facility.

Compared to the same month last year, the airport grew passenger numbers by 5 per cent. This is the first January in its 79-year history that numbers surpassed two million.

Continental Europe was the busiest destination in the first month of the year with more than one million travelling to and from European destinations, a rise of 8 per cent on January 2017.

While UK traffic remained static at almost 745,000 passengers, volumes to and from North America grew by 14 per cent with almost 211,000 taking transatlantic flights in January.

Passengers using the airport as a hub, a key part of the Dublin Airport Authority’s growth strategy, rose by 22 per cent to about 108,000 while other international traffic grew 4 per cent to 85,000 passengers.

This year the airport will add 21 new routes and services, 14 of which are short haul with the remainder to long haul destinations.

The strong January results follow a record 2018 in which the airport catered for 31.5 million travellers, up 6 per cent on the previous year.

With flights to almost 200 destinations, the airline is now the 11th busiest in the European Union.