Concerns over Derry airport after loss of Flybmi London route

Region’s businesses will be damaged by lack of connection to London, say industry leaders 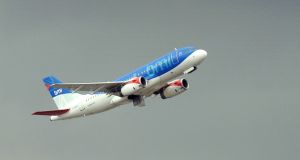 The loss of the Derry to London Stansted route after flybmi ceased all operations will “be very damaging to businesses in the region,” industry leaders have warned

The loss of the Derry to London Stansted route after Flybmi ceased all operations will “be very damaging to businesses in the region,” industry leaders have warned as concerns grow over the viability of the Northern Irish airport.

The collapse of Flybmi, which partly blamed its demise on the “uncertainty created by the Brexit process”, leaves the City of Derry Airport (CODA) without one of its core routes.

Only two airlines, Ryanair, which operates flights to Liverpool and Edinburgh, and Loganair, which has a Glasgow route, now service CODA.

The airport is 100 per cent owned by Derry City and Strabane District Council which provide financial support of £2.145 million (€2.45 million) each year.

According to the airport’s latest financial statements ending March 2018, the council expects to continue to provide this level of funding until 2021.

Derry City and Strabane District Council has repeatedly warned that the Derry to London Stansted route is not only “vitally important to the council and the airport” but also to the regional economy in the north west.

Last week the UK government confirmed that it would continue to subsidise direct flights between Derry and London until May 2021 – a move that had been warmly welcomed by the council and also by Donegal County Council. It is estimated that around 40 per cent of passengers that use CODA each year originate in Donegal.

UK transport secretary Chris Grayling has said that the UK government is committed to the Derry to London Stansted route because it “strengthens the union, protects choice and boosts trade and travel opportunities” and that it was important for the local business community because it enabled them to make corporate trips “to and from London within a day”.

A spokeswoman for CODA said on Sunday that Derry City and Strabane District Council “remain committed to securing an immediate replacement” for Flybmi on the vital route.

“The council would like to reassure the public that its chief executive, senior officers from council, officials from the City of Derry Airport board and the department for transport have been involved in urgent discussions since the announcement was made, to assess the situation and put into place measures to secure a new operator for the route as soon as possible,” she said.

But in the meantime passengers who had been scheduled to travel with Flybmi are stranded or will be forced to make other arrangements.

Brian McGrath, president of the Derry Chamber of Commerce said:”This news is terribly disappointing, particularly in light of the recent announcement from the Department of Transport that it would continue to subsidise flights between Derry and London. The Derry to Stansted link is an incredibly important one for connecting those who live here in the north west to London. The loss of this will also be very damaging to businesses in the region who rely on this flight.”

SDLP Councillor Martin Reilly said that it is extremely regretful that the airport has lost its only route to London. Mr Reilly said: “This route was regularly used and heavily relied upon by many in the north west.

“It will not come as a shock to anyone that Flybmi are citing Brexit as the cause of filing for administration. The SDLP would hope that the loss of this vital service will focus the minds of Brexiteer MPs, both here in the North and elsewhere, advocating for Brexit no matter the cost.”

The collapse of Flybmi and the knock-on effect on the Derry to London Stansted route will reignite the debate over whether Northern Ireland needs three airports.

Passenger numbers, according to latest figures from the Northern Ireland Statistics and Research Agency dropped at Derry airport by 36 per cent over the 12 months to March 2018.

Prior to the collapse of Flybmi the airport operator said it was expecting to handle approximately 220,000 passengers over 2018/2019.

1 Money matters: ‘My father embarrassed us with his haggling’
2 Comcast acquires Irish cloud-based telco Blueface
3 Ryanair to pay portion of Peter Bellew’s legal costs, court rules
4 Firm sues Trinity College over contract for managing visitors
5 High costs and low returns will fuel nursing home shortage - CBRE
6 Pilita Clark: When a rude boss keeps you waiting, why not walk out?
7 Are there annual limits on inheritances or gifts to a child?
8 Volvo warns of scaled back car line-up if UK splits from EU rules
9 Opioid executive admits to ‘no morals’ ahead of prison term
10 Restaurants put VAT cuts at the top of their pre-election menu
Real news has value SUBSCRIBE