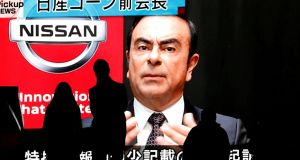 Mr Ghosn has been held in detention since his November 19th arrest. Photograph: Issei Kato/Reuters

No reason was given for the resignation in a statement distributed by Mr Otsuru’s law firm. Staff at his office confirmed his resignation but would not give a reason.

Mr Ghosn has been held in detention since his November 19th arrest and indicted on three charges for under-reporting his salary and breach of trust.

Mr Ghosn denies the charges and told the Nikkei newspaper that Nissan executives opposed to his plans for closer ties with automaking partner Renault plotted to remove him. – Reuters