Direct flights between China and Ireland set to boost tourism

Number of Chinese visitors reached 50,000 in 2016, a year earlier than expected 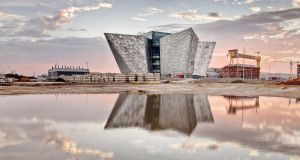 Assumpta O’Neill said Titanic Belfast had seen a huge increase in the numbers of Chinese tourists.

The widely expected introduction of a direct flight between China and Ireland should give Chinese tourism to Ireland a major boost, while the number of Chinese visitors reached 50,000 in 2016, a year earlier than expected.

“Although we haven’t got official figures yet, last year we’re very sure the numbers were over 50,000 and that’s the target we set for 2017,” Tourism Ireland chief executive Niall Gibbons said at an event at the Irish embassy in Beijing.

“Now we have completed a review of developing markets out to 2025 and we feel there are really good prospects in this market here, so that’s why I’m here for my seventh time in China,” Mr Gibbons told The Irish Times.

The travel industry has been clamouring for a direct route to either Beijing or Shanghai for several years now, and it has become one of the pillars of Tourism Ireland’s plans for expansion in the China market.

As of yet, no airline has signed up to debut the route, but travel industry sources believe a direct flight could happen within months, most likely with a Chinese carrier.

Currently travellers to Ireland have to stop over in one of the United Arab Emirates hubs, or in Europe.

“The direct flight will be the key to moving to the next stage,” said Mr Gibbons.

Chinese tourism globally is not registering the dizzying growth rates of a couple of years ago, but the numbers remain substantial. Chinese tourists spent about € 240 billion last year, a rise of 12 per cent over 2015, while the number of travellers rose by 6 per cent to 135 million, according to data from the United Nations World Tourism Organisation (UNWTO).

Some 18 representatives from 16 companies, including Kildare Village, National Trust Giant’s Causeway and Titanic Belfast, were taking part in the trade mission, which will visit Beijing, Shanghai, Guangzhou and Hong Kong.

“This year we are looking at a 100 per cent increase in the number of Chinese visitors,” said Alison Johnston, head of tourism at Kildare Village.

“The tourists like the higher end brands – handbags, clothes with brands they recognise. Anything high-end with a European brand appeals,” said Ms Johnston.

“Mostly it’s tour groups, but there are a lot of students in Ireland who come and shop with us for Freshers’ Week. People also come and shop for Chinese new year and a couple of times of year we give them additional discounts to bring gifts home,” said Ms Johnston.

Assumpta O’Neill said Titanic Belfast had seen a huge increase in the numbers of Chinese tourists.

“They are interested in the whole Titanic story. They seem to like the interactive element. We offer an express tour and a guided service especially for Chinese tourists,” said Ms O’Neill.

Mr Gibbons said the appointment of James Kenny as country manager for China, based in Shanghai has been a big boon. Mr Kenny speaks Mandarin fluently and knows the country well,