Airline recognises those known for innovation, pioneering and inspiring others 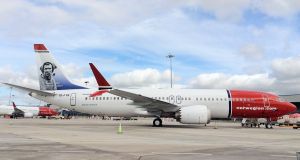 The Boeing 737MAX with the Tom Crean tailfin took off from Belfast at the weekend, bound for Stewart International Airport in New York.

Explorer Tom Crean became the first Irishman to feature on a Norwegian Air tailfin when the airline’s new Boeing 737MAX took off from Belfast at the weekend, bound for Stewart International Airport in New York.

Norwegian has a tradition of putting on its tailfins the image of figures known for their innovation, pioneering achievement and for inspiring others.

The profile of the Antarctic explorer appears on the airline’s brand new jet which will service its transatlantic routes from Ireland that started operating earlier this month.

Thomas Ramdahl, Norwegian’s chief commercial officer said: “It is fantastic to see our first Irish tailfin hero take to the skies on our new MAX aircraft. Tom Crean is an unsung hero and a truly inspirational figure so it is a great honour to have him adorn our aircraft and become our first ever Irish tail fin hero.”

Norwegian is due to take delivery of six Boeing 737MAX aircraft this summer. Aviation entrepreneur Sir Freddie Laker features on the second aircraft currently in service.

Irish author Jonathan Swift will feature on one of the next four planes, which are due to come into service in the next few weeks.