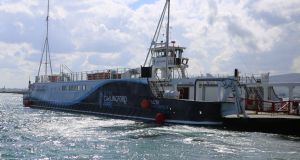 The new cross-border ferry service will be the first of its kind to link Greenore, Co Louth and Greencastle, Co Down across the iconic Carlingford Lough 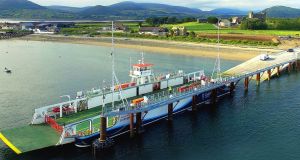 The new cross-border ferry service will be the first of its kind to link Greenore, Co Louth and Greencastle, Co Down across the iconic Carlingford Lough.

A new cross-border ferry service across the Carlingford Lough has made its maiden voyage.

The daily service, which runs from Greenore, Co Louth to Greencastle, Co Down, is the result of a €10 million investment by Limerick-based Frazer Ferries.

Eighteen full-time jobs are to be created by the new project, which was first mooted over a decade ago but has faced a number of delays due primarily to legal challenges.

The new crossing, which carries up to 44 vehicles and takes between 15 to 20 minutes, will save passengers up to 90 minutes versus doing the journey by road. The service runs 364 days of the year with hourly sailings from 7am to 10pm and from 9am to 10 pm on Sundays.

A rival daily passenger service between Omeath and Warrenpoint operates during the summer season although this does not transport cars.

Paul O’Sullivan, founder and managing director of Scenic Carlingford Ferry said while the new service was primarily aimed at tourists, he had been inundated with calls from local businesses keen to use it.

“We think there will be a very healthy commuter trade and would be confident that we can do well during the off-season as well as from tourists,” he said.

Mr O’Sullivan said that while the company was monitoring Brexit negotiations he believed that the new service would thrive, regardless of the outcome of discussions.

“We are of the view that whatever the outcome of Brexit we believe that there are plenty of people who will continue to be attracted to both destinations on the lough,” he said.