Can mediator mend fences between Ryanair and pilots? 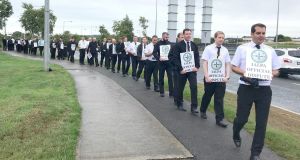 Ryanair pilots stage a one-day strike outside the company headquarters at Swords in Dublin on Friday. Mulvey will have a job on his hands, as there is plenty of rancour between the two sides. Photograph: Aoife Moore/PA Wire

It is probably too early to declare an outbreak of peace in the dispute between Ryanair and a group of Irish pilots, but the likely appointment of industrial relations troubleshooter Kieran Mulvey to mediate between the sides gives grounds for hope.

About 100 of Ryanair’s 350 Irish-based pilots are in dispute with the airline over seniority, more particularly, base transfers, promotions and leave. They are members of the Irish Airline Pilots’ Association (Ialpa), a branch of trade union Fórsa. So far they have staged four one-day strikes at Ryanair, including one on Friday, and plan a fifth next Friday, August 10th.

Ryanair on Friday proposed appointing Mulvey to act as a third-party mediator, a move that Ialpa-Fórsa welcomed, as it offered a way out of an impasse in which the sides could otherwise have languished for weeks. The union had already indicated that it would be willing to deal with a third party.

This is not a Workplace Relations Commission or Labour Court process. It is both sides agreeing to an independent party coming in to help end the deadlock. Mulvey is likely to require both to make some initial concessions.

In the union’s case, that could mean holding off on further strikes after August 10th. In Ryanair’s it could involve the airline suspending its proposal to cut its Dublin Airport fleet from October with the potential loss or transfer of 100 pilots and 200 cabin crew.

Even with those concessions on the table, Mulvey will still have a job on his hands, as there is plenty of rancour between the two sides, along with real differences over the issues in dispute. Nevertheless, Ialpa-Fórsa sought a third party and Ryanair responded by choosing someone whom it knew the union would accept.

So, while both sides may yet fire a few more volleys at each other, once Mulvey arrives, that may mark the beginning of the end of this particular battle.