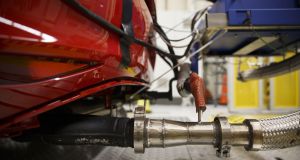 An emissions-testing system for cars. The EU is rolling out a more rigorous testing regime. Photograph: Getty Images

New car sales are down 4 per cent so far this year, an oddity considering the uptick in other consumer activity of late. However, this may well be calm before the storm for a sector facing uncertainty at every turn.

And in the background is the constant mood music of politicians tinkering with policies to try to square the need to be seen to be promoting innovation and preserving the environment while also protecting tax income and keeping the population on the move.

The industry-wide revolutions – electric cars, changing ownership formats and autonomous driving – are likely to make their impact felt incrementally over the next decade or so. However, Brexit and the changes to the emissions rules are already hitting home on forecourts right now.

The former’s impact on sterling is making used imports attractive for many buyers. A no-deal Brexit next year may shut the door to a lot of this traffic, but it would also push up prices on all parts and components sourced from the UK.

As for changes to the emissions rules, thanks in part to Volkswagen’s cheating on emissions tests, the EU is rolling out a more rigorous testing regime under the moniker WLTP. Here in the Republic, where the tax regime is based on emissions, it will potentially mean higher prices.

To add to the fun, the new emissions regime takes account of changes in equipment level and adjusts the official figures. So opting for a sunroof, for example, could push a new car into a higher tax band. The complexity is reportedly driving engineers stir crazy.

It’s also affecting many Irish car sales staff trying to decipher what it might mean for customers. Car-buyers already unsure about Brexit are learning about potential changes to emissions ratings and tax policy. Understandably some customers are opting to wait to see how it all pans out. None of this bodes well for 2019 new car sales.