Summer sales drifting away for Next

Cantillon: After hot streak, fashion retailer forecasts weather will now work against it 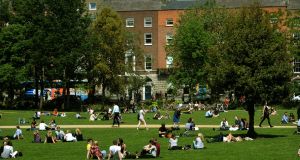 Summer wardrobes can only expand so much. Enjoying the sunshine in Merrion Square, in Dublin. Photograph: Dara Mac Dónaill

First sign of a heatwave, lovely. Break out the straw hats and open-toe sandals. Invest in breathable fabrics, shun long sleeves, weigh up the appropriate occasions for shorts. Try not to overheat, or, if you happen to be a fashion retailer, “over-perform”.

Out in the sunshine on Wednesday admitting that it has probably had too much of a good thing by now, thanks, was British retailer Next. It has soaked up a 2.8 per cent rise in second-quarter sales, ahead of its own expectations. But the performance came with a caveat: there’s only so much summer stock it can shift.

“We over-performed in the second quarter as a result of the weather. We think some of that will be sales pulled forward from August,” said Next chief executive Simon Wolfson. “Some of the stock we were planning to sell in August has already sold.”

So although the warm weather has led to sizzling summer fashion sales, the effect won’t last even if the weather does. As a result, Next won’t be changing its full-year revenue outlook, it said.

There’s a simple seasonal logic at play here. Few people buy summer clothes in August – certainly not at full price. But if it’s still blazing outside, they may delay picking up their first autumn buys – solid, sturdy, grown-up clothes – until later than usual.

Over the sweaty course of a long, record-smashing period of hot weather, the law of diminishing returns starts to apply. Soon all that samey sunshine starts to work against retailers and they’re longing for an early cold snap.

In this part of the world, we’re used to summers that last about as long as it takes linen to crease. Next is unlikely to be the only clothing retailer having to adjust to the exceptional 2018.

The hope for all of them will be that these post-drought downpours prompt some belated purchases of raincoats. And then, who knows, maybe even a cardigan?