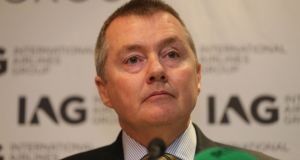 The boss of Aer Lingus and British Airways owner International Airlines Group (IAG) has said he is “optimistic” over a legal challenge to end crippling strikes, but warned over long-term disruptions for fliers if it does not succeed.

He said last week’s co-ordinated action by IAG, easyJet, Ryanair and Wizz Air to complain to the European Commission about France’s industrial action showed the level of concern among carriers.

“This is an example of where fierce rivals come together on a matter of common concern and the interests of our industry,” he said.

“When you get the likes of IAG, Ryanair, easyJet and Wizz Air coming together saying the same thing and arguing for the same thing, people do take notice.”

He added he was “optimistic” the complaint will effect change, and said “the fact we are prepared to make a formal complaint and pursue legal channels demonstrates the concern”.

The four airlines claim France’s strikes breach the “fundamental principle of freedom of movement within the EU”, having already caused tens of thousands of flights to be cancelled this year, affecting millions of passengers.

They allege that France is breaking EU law by not enabling flights over the country during strikes, denying passengers their fundamental freedom to travel between member states not affected by strike action.

The air traffic control (ATC) strikes are costly for airlines and hugely disruptive for passengers, especially in France, as many UK flights need to use the country’s airspace or fly longer routes to avoid it.

Mr Walsh said the industrial action has been particularly disruptive for IAG’s Spanish low-cost airline Vueling, which was forced to cancel more than 900 flights in June as a result of the strikes, impacting on about 150,000 passengers.

BA has been affected to a lesser extent, with 45 flights cancelled as a result in June, but the cost to IAG will be revealed in its half-year results on Friday.

“It’s impacted on business people, families travelling on holidays and people who have had the need to travel for urgent requirements, so it’s hugely disruptive and could be avoided,” said Mr Walsh.

Ryanair and easyJet have also laid bare the impact of the strikes in recent weeks, with around 2,000 flights cancelled between them both in June alone as a result of the action.

This year has been a very bad year for ATC strike delays, but if we don’t do something about it, it’s only going to get worse

Luton-based easyJet revealed in July it had taken a £25 million (€28 million) hit from the disruption as it was forced to pay passengers compensation.

French ATC strikes have increased by 300 per cent so far this year.

More than 16,000 flights were delayed in the first half of 2018 alone due to ATC strikes, affecting more than two million passengers, according to Eurocontrol figures.

Mr Walsh said there has been some respite in July, with France suspending its ATC strikes, but warned it will only be brief.

“This year has been a very bad year for ATC strike delays, but if we don’t do something about it, it’s only going to get worse,” he said.

“This problem will reoccur.”

The airlines want the commission to insist France allows overflights during its strikes so that the disruption is not more widespread.

They believe there is legal precedent to this case, dating back to 1997, when the Spanish complained to the European Commission after action by French farmers prevented their fruit and vegetable exports into the EU.

The European Court ruled against France as the French authorities did not address the farmers’ actions and failed to ensure the free movement of goods.

Mr Walsh admitted the legal avenue they have pursued is “not a quick process”, but should prevent future disruption on such a devastating scale.

“It’s important that we lodge this case and see action being taken,” he said. – PA