BA in union talks to suspend around 32,000 staff - source 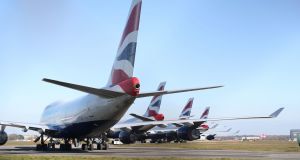 British Airways Boeing 747 aircraft parked at Bournemouth airport after the airline reduced flights amid travel restrictions and a huge drop in demand as a result of the coronavirus pandemic. Photograph: Andrew Matthews/PA Wire

Aer Lingus’ sister airline British Airways is in talks with its union about a plan to suspend around 32,000 staff, a person familiar with the situation said, marking one of the industry’s most dramatic moves yet to survive the coronavirus pandemic.

Having already agreed a 50 per cent pay cut for its pilots, the British flag carrier is now nearing agreement on a deal to suspend around 80 per cent of its cabin and ground crew, engineers and office staff to see it through the worst crisis in its history.

Owned by IAG, the parent of Aer Lingus and one of the largest and most financially robust airline companies in the world, British Airways has already said it is in a fight for survival.

“The deal is not done yet,” the source said.

Separately, on Thursday IAG cancelled its final dividend, saving €337 million. The company’s shares had risen on the jobs plan, but was down 0.5 per cent after the dividend decision.

Hundreds of companies across a range of sectors have scrapped dividends to conserve cash, but the move by IAG marks a particular blow for investors because it was the third highest yielding stock by dividend on the UK’s benchmark FTSE 100.

With planes unable to fly because of travel restrictions, compounded by a plunge in demand over fears of contagion, airlines worldwide have grounded most of their fleets, and many have said they need government support to survive.

BA has joined the global industry race to conserve cash. In recent weeks Qantas Airways put two-thirds of its workforce – 20,000 workers – on leave, while Lufthansa applied for short-time work for around 31,000 crew and ground staff at its core brand until the end of August.US airlines are set to receive $25 billion in grants to cover payrolls over the next six months,

The companies are trying to avoid making staff redundant so they can respond quickly to any increase in capacity when a recovery comes.

IAG, which owns 598 aircraft across its network which, apart from Aer Lingus, also includes Iberia and Vueling, is cutting capacity by 75 per cent in April and May. – Reuters