Cats killed in Egypt in mistaken belief they carry coronavirus 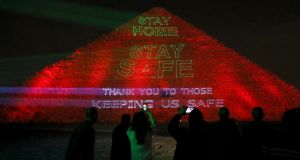 Desperate Egyptians are killing cats in the mistaken belief they carry coronavirus.

The lack of official transparency about the causes and cases of the virus has left the multitude of poor Egyptians to rely on rumours and false news. On Tuesday, the health ministry reported 710 cases and 46 deaths but most Egyptians believe the tally is far higher.

Guardian correspondent Ruth Michaelson was expelled from the country for reporting that infections might be greater than officially claimed. Critics of the handling of the virus crisis have been detained for spreading false news.

Trust in the government is in short supply.

Shortages of disinfectant, masks, gloves and gowns have forced doctors to buy whatever is available on the market to avoid infection. Hospitals urge local firms to manufacture these items as well as ventilators.

Egyptians have been alarmed by revelations that two senior army officers, Maj Gen Shafie Abdel Halim Dawoud and Maj Gen Khaled Shaltout, died after being infected by the virus.

The monitoring and documentation unit at the Egyptian Institute for Political and Strategic Studies (EIPSS) reported that 550 soldiers and officers have contracted the virus and the number is rising. The army corps of engineers has been exposed when sanitising public places.

After reportedly self-quarantining for two weeks at a military headquarters in the Cairo suburb of Heliopolis, president Abdel Fattah al-Sisi urged Egyptians to exercise discipline and pledged the equivalent of nearly €6 billion to fight the disease.

However, isolating and distancing cannot be exercised by a majority of the 100 million Egyptians who live in cramped conditions.

In mid-March, Egypt shut down schools and universities, banned public gatherings and suspended flights. Subsequently, mosques and churches were shuttered although many devout Egyptians look to communal prayer to see them through the crisis.

An overnight curfew was imposed and staff numbers at resort hotels were reduced by half.

With the aim of pre-empting an expected economic downturn, Egypt’s central bank has cut the interest rate and extended a $1.27 billion (€1.16 billion) lifeline to the stock market.

Concerned that the government might be compelled to extend restrictions, Egypt’s second-richest man, Naguib Swaris, has called for a return to work by April 8th to prevent economic collapse. During a television interview, he said, “Even if people get sick, they will recover.” He threatened to take his own life if his demand was ignored.

Egypt has refused to follow other countries’ example by releasing substantial numbers of prisoners to reduce the risk of infection among an estimated prison population of 65,000, nearly half of whom are political and pre-trial detainees.

As hundreds of curfew violators were arrested on Monday night, Egypt’s Great Pyramid at Giza was illuminated with messages of international solidarity and unity in the global war against the virus. The words “Stay safe” and “Stay home” swept across the red-lit monument in blue and green.